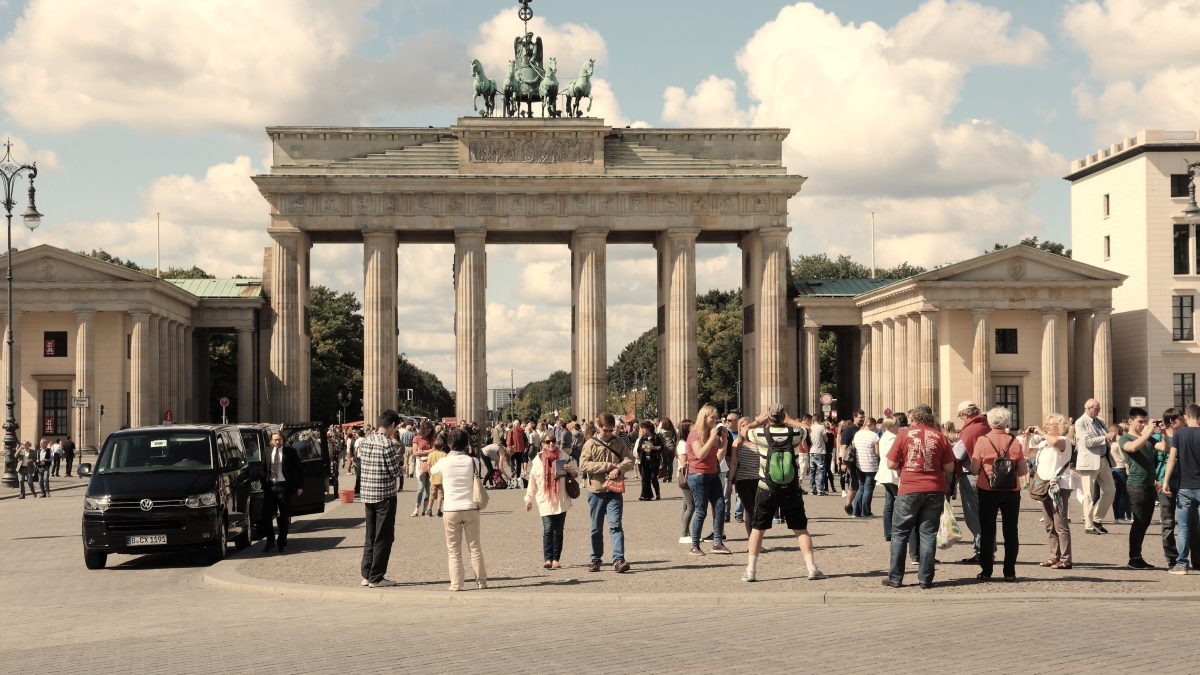 Top 10 things to do in Berlin

Home Lifestyle Things to Do Top 10 things to do in Berlin
Last update on March 23, 2020
Share

Discover Berlin’s many faces with this list of the best and quirkiest things to do in Berlin, from graffiti and underground clubs to orchestras and opulent palaces.

If you’re sightseeing Berlin, this list of top places in Berlin will only scratch the surface of Berlin’s many sides: Berlin’s best tourist attractions range from underground clubs and street graffiti to leading art museums and emotional World War II memorials. It’s also a city to get outside and picnic in parks, eat currywurst on the streets and browse on of the many flea markets.

Get stuck into Berlin’s tourism with this list of the best things to see and do in Berlin: a guide to Berlin’s essential sites and attractions, museums galleries, clubs and parks. Start planning your Berlin tour!

1.  Explore Berlin on a bike

Berlin is a great city to explore by bike: there are lots of places to rent bicycles, plus there are plenty of cycle lanes and cyclist road traffic signs. Start at the Reichstag, the home of the Federal German Parliament. You can take a lift up to the roof terrace and new glass dome, designed by UK architect Norman Foster, for fantastic views across Berlin. It’s free but you need to register first. Then head across to the Tiergarten park and onto the Brandenburg Gate, the iconic gateway to Berlin overlooking Unter den Linden. Make your next stop Checkpoint Charlie, the best known crossing point between East and West Germany, before moving on to the Topography of Terror, a museum about the Nazi SS and Gestapo and built on the site of their old HQ.

The hairs on the back of your neck will stand up when you walk through the atmospheric and poignant Holocaust Memorial. The 2,711 concrete slabs of different heights represent the six million Jews murdered during World War II. The Denkmal für die ermordeten Juden Europas (Memorial to the Murdered Jews of Europe) is open every day and throughout the night and admission is free.

The Jewish Museum in Kreuzberg deals with Jewish history, culture and belief through the museum’s exhibits but also through the symbolic architecture of Daniel Libeskind: the zinc facade, the Garden of Exile, the Three Axes of the German-Jewish Experience and the Voids.

Just outside Berlin is the Sachsenhausen Concentration Camp, one of the first camps to open to the public after the war. More than 200,000 opponents of the Nazi regime and Jews were imprisoned there between 1936 and 1945, and there were a further 60,000 prisoners held under the Soviets between 1945 and 1950.

The Berlin Wall was put up on 13 August 1961 to prevent people escaping from East Berlin into West Berlin during a time of the Cold War, a period of extreme tension between the western European democracies and the Eastern European communist countries. Anyone who tried to get across the wall risked being shot – and many people were. The Berlin Wall remained in place until 9 November 1989 when the East Germans announced that their citizens could cross for the first time; that night crowds of people attacked the wall with picks and hammers to bring the wall down. The East Side Gallery, decorated with more than a hundred murals by international artists in 1990, is the largest remaining section. To find out more about the Berlin Wall, visit the Berlin Wall Memorial, which stretches 1.4km along the former border strip Bernauer Strasse.

Berlin is one of the clubbing capitals of Europe, with a massive array of clubs and nightlife (and not just techno), many of them based in old warehouses and factories. Here’s a selection of some of the best:

Lying in the middle of the river Spree is UNESCO-World Heritage Site Museum Island, where you’ll find five of Berlin’s best and most important museums. Alte Nationalgalerie’s collection includes Romantic and Impressionist masterpieces, while Altes Museum has classical antiquities and the Bode-museum has sculpture and Byzantine art. Neues Museum is where you can see the stunningly beautiful Egyptian Queen Nefertiti head sculpture. Don’t miss the archaeological wonders of the Pergamon museum, where you can walk through a partial recreation 2nd-century Pergaman Altar, the vast Roman Market Gate of Miletus and the 7th-century Ishtar Gate and Babylonian Processional Street. You can admire the museums’ awesome neo-classical architecture for free but you’ll need to get a ticket to get in: consider getting a day ticket which allows access to each of the museums.

6.  Berlin’s market and park culture: Enjoy a barbeque on an airport runway

Berlin’s parks have fascinating back stories. Today Tempelhofer Park (also called Tempelhofer Feld or Freiheit) is a vast open space to the south of the city with barbeque areas, a beer garden, art installations and an urban garden project but up until 2008 it was Tempelhof airport. The airport played a vital role during the Berlin Blockade of 1948–9, when Stalin cut off road and rail links to the city – some 275,000 planes landed here with 1.5 million tons of essential supplies.

Mauerpark (‘wall park’) in the Prenzlauer Berg area of Berlin is a long, narrow park which was once part of the Berlin Wall’s ‘Death Strip’, which was patrolled by armed guards. Now it’s filled with people cycling, making music and juggling. On Sunday afternoons there are karaoke sessions in the amphitheatre and a Sunday afternoon flea market.

Even the sprawling, leafy Tiergarten in the centre of Berlin was once a hunting ground for the German royals; you’ll more likely see picnickers and nude sunbathers now than wild boar.

Berlin also has lots of markets to explore: check out the twice-weekly Winterfeldt farmer’s market in the square around St Matthias Kirche in Schöneberg, or the Boxhagenar Platz food market and Sunday flea market in Friedrichshain, or head to Mitte for the weekend arts market. ‘Thai Park’ is also great for a cheap meal, where families informally cook and sell homemade food in Preußenpark, the green area behind the Fehrbelliner Platz metro station.

7.  See how the other half lived: visit the opulent Schloss Charlottenburg

As an antidote to the bustle of city life, take a trip out to the Charlottenburg district, just outside the centre of Berlin, to the Charlottenburg Palace. This was the summer residence of Sophie Charlotte (1668–1705), the first queen of Prussia and the wife of King Friedrich I. The palace and three smaller buildings are set in glorious grounds next to the river Spree. The oldest part of the palace is stuccoed Baroque style and includes a wood-panelled festival hall festooned with portraits, Friedrich I’s bedchamber and the Porcelain Chamber, which is filled with thousands of pieces of porcelain china. The ‘new’ wing built in 1742 by Frederick the Great contains exquisite Rococo rooms, gilded and mirrored, with ornate chandeliers and hand-painted, silk-covered walls.

Currywurst, a sausage covered with a spicy tomato sauce, is Berlin’s favourite snack. Eat it the Berlin way, ohne darm (without skin), at a standing table with a side order of fries or a bread roll. Some places to try currywurst include Konnopke’s, underneath the Eberswalder Strasse U-Bahn station in Prenzlauer Berg, Curry 36 in Kreuzberg, or go farther out to try Krasselts.

Berliners love currywurst so much they’ve dedicated an entire museum to the sausage. At the interactive Currywurst museum, you can make a virtual currywurst, sniff aromas in a spice chamber, relax on a sausage-shaped sofa and find out everything there is know about the spicy sausage.

9.  Go to a concert by the Berlin Philharmonic

The Berliner Philharmoniker (the Berlin Phil) is one of the world’s most famous orchestras. The orchestra played its first concert in a former roller skating rink in 1882; today its home is the Berliner Philharmonie, an asymmetric tent-like building acclaimed for its acoustics located on the southern edge of the Tiergarten in the Kulturforum. Its list of conductors reads like a who’s who of famous composers: Tchaikovsky, Grieg, Richard Strauss and Mahler have all been elected by the orchestra to conduct it; the current conductor is Simon Rattle. The orchestra gives around a hundred performances in Berlin every summer and spends the rest of the year on tour. You can get discounted tickets just before performances start.

10. Absorb yourself in the art of Berlin

Berlin is an artistic hub with around 440 art galleries. The Berlinische Galerie houses a collection of Berlin art from 1880–1980 in an old glass warehouse. If you prefer Old Masters, then check out the Gemaeldegalerie, one of the world’s most important collections of European painting from the 13th to the 18th centuries – among its 3,000 paintings you’ll find works by Rubens, Rembrandt, Titian, Bruegel, Caravaggio and Vermeer.

The converted royal post office, C/O Gallery, showcases the biggest names in photography – and has one of the best coffee shops in the area. At the Zagreus Projekt, you can enjoy site-specific art installations with gourmet dining.

Look up Berlin ArtLInk, the online guide to contemporary art and culture in the city.

Two major annual events to look out for:

In Berlin you’ll also see urban knitting, guerrilla gardening and, of course, street art everywhere: graffiti on doors, walls, corners of houses, on bridges and by the roadside. El Bocco and XOOOX are two of the most well-known street artists, and there are several companies that offer tours of the most impressive graffiti artworks.