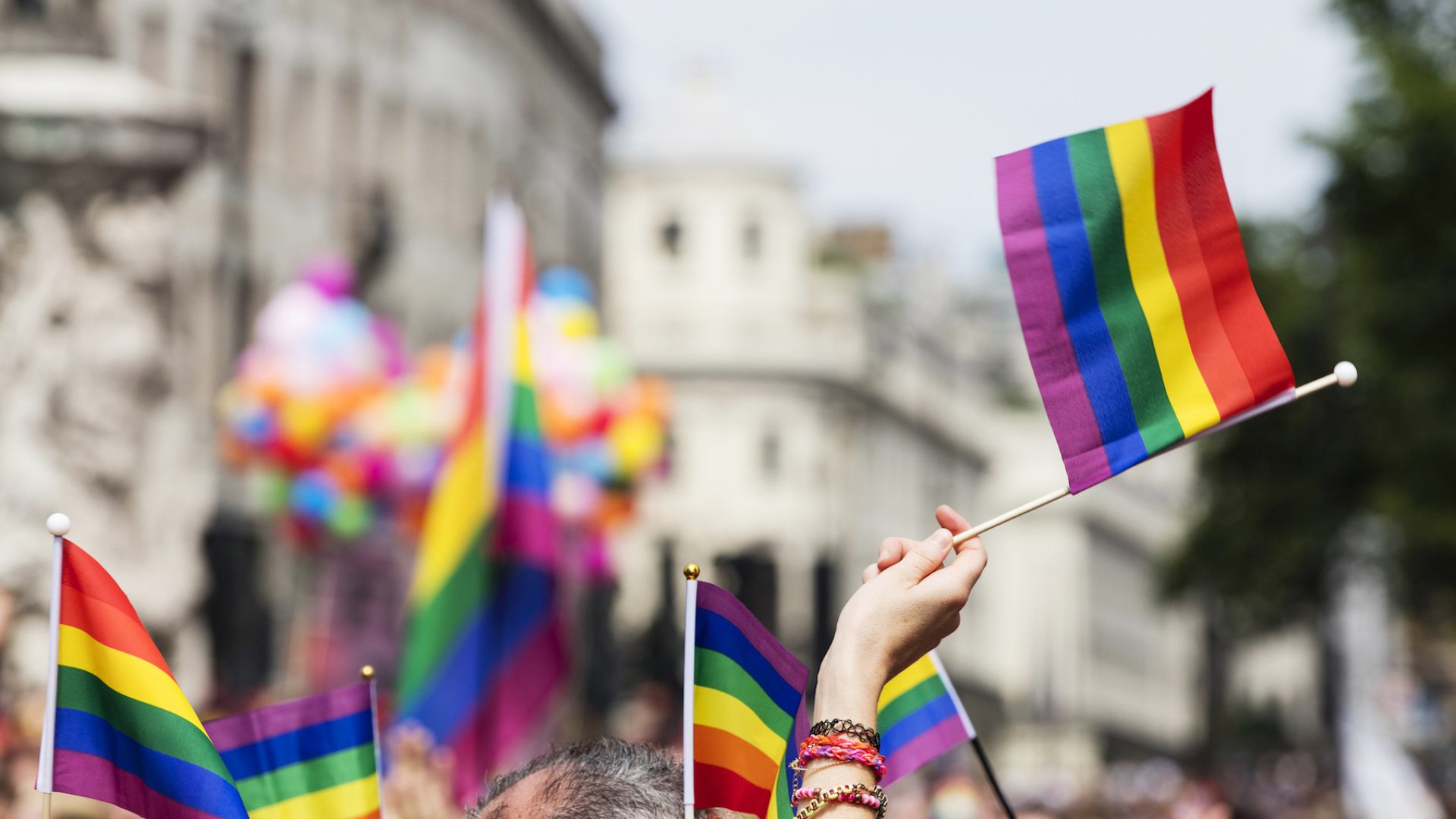 From same-sex marriage and parenting rights to societal attitudes and media representation, we explore LGBT+ rights in Austria.

Generally speaking, LGBT+ rights have made vast progress over the last two decades in Austria. Although change has perhaps been slower than in other European countries, the overall atmosphere in Austria is a welcoming one today. The rights and inclusion of the LGBT+ community – lesbians, gay men, bisexuals, transgender, and individuals identifying uniquely – is of utmost importance. After all, it is a basic civil right to live free of discrimination. And thankfully, Austria is making great headway towards including and protecting the LGBT+ community.

In recent years, the government has made great strides towards inclusion by updating its laws and providing more protection for minority groups. As well as adapting its policies, Austria is creating a culture of inclusion throughout the nation through events and campaigns that are broadening the minds of its citizens nationwide.

To explain more about LGBT+ rights in Austria, this helpful guide includes the following information:

Austria ranks 17th in the latest ILGA-Europe rating of 49 European countries in the world. The rankings are based on the laws and policies of each country regarding the LGBT+ community. The results track each country on factors such as equality, family issues, hate speech, legal gender recognition, freedom of expression, and asylum rights. This places Austria in a fairly central position on the scale for Europe; with Malta and Belgium leading the way and Turkey and Azerbaijan lagging.

Austria came in a remarkable fourth out of 197 countries ranked in the Spartacus Gay Travel Index 2019. The country legalized homosexuality in 1971 and introduced comprehensive anti-discrimination measures in 2004. Same-sex marriage was legalized in 2019 and LGBT+ people are able to serve openly in the military. Austria also passed legislation allowing citizens to change legal gender in 2009 and since 2019, the country now officially recognizes non-binary as a gender. Both male and female same-sex sexual activity is legal, with 14 as the legal age of consent.

Read our guide to gay marriage in Austria

While there aren’t official numbers on the size of the lesbian, gay, bisexual, and transgender population in Austria, a 2016 ECRI Report claims that 6.2% of Austrians identified as LGBT+. Fortunately, social acceptance is considered high in Austria. For instance, in 2019, Vienna hosted the EuroPride festival for the second time with great success and fanfare. The country’s larger cities are also home to many gay-friendly areas, while a general air of inclusion pervades the nightlife scene.

Although Austria still has some way to go towards becoming a completely inclusive nation, generally, the country is considered to be LGBT+ friendly.

2019 was a landmark year for the LGBT+ community in Austria, as same-sex marriage law was introduced; along with a host of additional progressive transgender legislation. The change brought Austria in line with 15 other European countries; the Netherlands being the first to legalize same-sex marriage back in 2001. This new law would also allow heterosexual couples to enter a civil partnership.

Before this law change, registered partnerships were the only option available to gay and lesbian couples. These were introduced in 2010 and gave same-sex couples only some of the same rights as a marriage.

Back in 2013, the European Court of Human Rights ruled in favor of stepchild adoption for same-sex partnerships in a landmark case. The Austrian Parliament went on to pass a government bill legalizing the process. Then in 2015, the Constitutional Court of Austria went on to legalize full joint adoption.

Additionally, lesbian couples can access both artificial insemination and IVF treatments in Austria. In 2018, a case regarding adoption issues following the end of a relationship lead to the ruling that same-sex couples must be treated the same as heterosexual couples.

Discrimination against LGBT+ people in Austria

In Austria, there are anti-discrimination protections in place based on sexual orientation. These were first implemented in 2003. Although intersex status and gender identity are not named directly, these are covered under the broader term of ‘gender.’

In 2016, Austria got serious about hate crime. Parliamentary amendments went into effect at the beginning of the year to make hate speech and crime against victims based on their sexual orientation an aggravated sentence.

LGBT+ discrimination in employment in Austria

It remarks that those identifying as gay or lesbian are sometimes discriminated against in the initial stages of hiring when up against heterosexual applicants.

This issue, however, was not unique to Austria and the same findings were found in other countries; this includes Cyprus, Greece, Sweden, the US, the UK, and Canada. This suggests that there are still large strides for each country to make towards becoming fully inclusive societies.

LGBT+ discrimination in housing in Austria

Fortunately, the LGBT+ community enjoys the same rights as the heterosexual community in Austria. When looking for temporary accommodation and hotels, travel booking platform misterbandb provides a curated list of gay-friendly hotels in Austria and beyond. The website also lists community-based room and apartment sharing. If you are looking for a place to rent or buy, our guide to housing in Austria might also help.

LGBT+ discrimination in education in Austria

The European Commission against Racism and Intolerance (ECRI) strongly supports inclusive education. The government body aims to ensure that children in Austria have equal opportunities in education and eliminate discrimination, in every form. However, the commission has found that LGBT+ youths are at the highest risk of being the target of violence in schools.

Sexuality education is part of the obligatory educational program in Austria. During the middle school years, the topics of biological aspects, pregnancy, contraception, love, marriage, gender roles, HIV, and sexual and domestic violence are covered. However, despite this, SpeakActChange.org claims that there are still gaps that exist. This is due to a lack of well-trained teachers, religious aspects, and conservative parents throughout the country.

LGBT+ discrimination in healthcare in Austria

Like with education, everyone in the LGBT+ community has the same rights as the heterosexual community in Austria. In fact, Austria lifted the ban on gay men donating blood in 2019 and replaced it with a 12-month abstinence period for gay and bi men.

Read our guide to the healthcare system in Austria

LGBT+ discrimination in the military in Austria

Since 2014, Austria permits LGBT+ individuals to serve openly in the Austrian Military. Furthermore, as of 2018, every country in the EU has adopted the same ethos.

Violence and hate crimes against the LGBT+ community in Austria

Austria is one of 17 countries in the OECD (The Organization for Economic Co-operation and Development) that offers the most legal protections for sexual and gender minorities. As of 2019, these countries have an above-average performance regarding both their level of legal LGBT+ inclusivity and progress.

The Hate Crime Kontern is a network that sheds light on and effectively counters hate crime in Austria. It represents initiatives around anti-discrimination, victim protection, and human rights for those affected by hate crime. In general, there are no particular gay-friendly areas of Austria. That said, major cities like Vienna have an array of gay bars; although the scene is not as thriving as in many other European cities.

In 2018, The Austrian Constitutional Court stated that being intersex is not a disorder. However, it added that medically unnecessary sex-normalizing treatment or surgeries on intersex minors be postponed until a child can provide informed consent.

In Austria, the minimum age requirement for sex reassignment surgery is 18. This mirrors several other countries in the region such as Denmark, Finland, Italy, the Netherlands, Portugal, Spain, and Sweden.

Alongside Germany, there has been a push in schools since 2015 to update gender-based language. This refers to nouns like ‘police officers’ or ‘teachers’ that take a masculine form. There have also been proposals for more unisex toilets in public buildings.

In English, many non-binary and intersex people use the pronouns they and them. However, in Austria, there is not yet a consensus on gender-neutral pronouns in German. When speaking about someone non-binary, it’s best to introduce yourself with your preferred pronouns and politely ask which ones they would rather you used for them.

Some options in German that you might hear include:

Public attitudes towards LGBT+ in Austria

In Vienna, in particular, public sentiment is inclusive and welcoming of the LGBT+ community, despite the scene being a small one. Since hosting EuroPride back in 2001, Austria has become comfortable with supporting its LGBT+ citizens and celebrating them. Gay travel blog nomadicboys.com rates Austria as number 19 in its list of top 25 gay-friendly countries to visit.

The LGBT+ lifestyle in Austria

Over the past two decades, several annual LGBT+ events have been established, particularly in Vienna. These include the Vienna Pride festival which is held every June and is a main event on the queer calendar. The bombastic event includes the highly anticipated ‘Rainbow Parade’ or Regenbogenparade.

Furthermore, during the Carnival season in Vienna, there are over 400 celebratory balls. Two of the LGBT+ extravaganzas include the Wiener Regenbogenball and the Rosenball. Every year, the Transition International Queer & Minorities Film Festival takes place, and every two years, the Identities Queer Film Festival takes center stage.

Meanwhile, the fetish scene looks forward to the annual Wien in Schwarz festivities and the Gay Snow Happening hits the slopes of Sölden in March. Ski Pride Kaprun is also a calendar highlight in April. The CSD Bregenz Pride Week in June, and Linz Pride in June, are also popular events. And finally, there is the Pink Lake Festival in August.

Discover the best places to visit in Austria

While Vienna doesn’t have a particular LGBT+ area, the Naschmarkt area around the fourth and sixth districts is the best and most welcoming scene in the city. The best gay bars in Vienna include Eagle, Village, and Sling. The cities of Salzburg, Linz, Innsbruck, and Graz also have small gay scenes to explore.

LGBT+ representation in arts, media, and sports in Austria

Conchita Wurst became one of the most famous gay Austrians after winning the 2014 Eurovision Song Contest with breakout hit Rise Like a Phoenix. Dressed in full drag and beard, Conchita defied convention and became an icon for all of Europe as a vision of an inclusive future. The decision to put forward the pop artist in the contest was a controversial one that put Austria on the map as a leader in progressive attitudes towards inclusion.

Notably, in 2019, the Minister of Education, Science, and Research Iris Eliisa Rauskala became the first government minister to come out as a lesbian in Austria.

Foremost, the forward trend in legal LGBT+ inclusivity in Austria has been particularly strong over the past decade. For the past two years, Austria is performing better than the OECD average when it comes to laws that address the unique challenges faced by same-sex couples and intersex individuals.

With same-sex marriages now holding the same rights as heterosexual marriages, the possibilities for adoption and reproductive medical treatments, Austria is gaining ground for its LGBT+ citizens.

Several groups in Austria continue to forward the cause and raise awareness, as well as provide support and community for LGBT+ individuals. Major LGBT+ organizations include HOSI Wien, Austria’s oldest and largest gay, lesbian, and bisexual association, and The Austrian Lesbian and Gay Forum (ALGF) and Afro Rainbow Austria (ARA) for LGBT+ migrants from Africa in Austria.

Civil and human rights in Austria