The South African economy is dominated by large corporations with a relatively underdeveloped small and medium enterprise sector. Consequently, the traditional South African organisational structure is a pyramid, consisting of many layers with a strong vertical inclination. However, due to global management trends of the recent past structures have been flattening. Decentralised decision-making and more responsibility at the lower organisational levels are the results of the globalisation process.

Groups within South Africa tend to live side by side rather than merge. For a foreigner, not aware of the strong influences Apartheid still holds for the South African society, this may feel slightly surprising. Nonetheless, South Africans do share a common identity, even though no one is able to fully explain what this South African identity entails. Moreover, there is a strong group orientation, which is noticeably strongest among black South Africans.

South Africa is a collectivist culture, with a high priority given to (extended) family or other group interests. Talking about different groups within society is not uncommon, but political correctness has sometimes had some (unwanted) side effects when strong positive discrimination made it very difficult for white higher educated Sud Afrikaners to find work at their educational level. Currently, this has evened out but sometimes foreigners are taken aback at the still present self-censoring mechanisms.

Planning is done on a short-term (one-year) to medium-term (five-year) basis. Nevertheless, a lot of larger and progressive organisations have developed long-term strategic plans and initiatives covering up to ten years or more. Though the country is growing more business-friendly after having ended its long isolation, a foreigner to South Africa’s complex legal framework and tax system is well advised to seek the assistance of local professionals.

Meetings can be rather informal. Be punctual according to schedule, yet do also plan some time in between two meetings in case the other will make you wait. There will considerable time to engage in small talk at the beginning of a meeting, to greet the participants and exchange business cards. Gift giving in a business context is uncommon in South Africa.

The most important aspect of conducting business successfully in South Africa is building stable personal relationships because the majority of South Africans want to trust the person they are dealing with. Direct confrontation tends to be avoided. Most South Africans do not appreciate haggling over profit and expenses. Instead, they aim at creating a win-win situation for the mutual benefit of all parties involved.

The responsibility of decision-making is usually passed up the hierarchy. Disregarding this tradition would mean to challenge the established order of things, and is not necessarily an advisable move! Trying to avoid any unnecessary delay, it is prudent to negotiate with the person who actually has the authority to make decisions. Note that a lot of the time deadlines are not really perceived as binding commitments but rather as somewhat fluid. It is therefore advisable to include dates when setting up a contract with your business partners.

Throughout South African business life it is essential to be on time, especially when attending a meeting. And in this case, being on time means being at the given spot, preferably ten to five minutes before the actual meeting starts according to schedule.

Appointments are necessary for South African business life. Regardless of their cultural background, most South Africans clearly prefer a face-to-face encounter to a telephone call or email contact.

Avoid scheduling meetings from mid-December to mid-January or the two weeks surrounding Easter, as these are prime holiday periods.

At work business, people are generally dressed more or less conservatively. Do not be surprised, however, to also come across people dressed in traditional African garments at work or during business meetings. This is certainly common during evening gatherings and dinners.

Business lunches and dinners are very common in South Africa. Also, business breakfasts are quite popular. Although actual negotiations are not carried out during a meal, business may be discussed.

It is common to exchange business cards at a meeting, and it is often done before or at the very end. 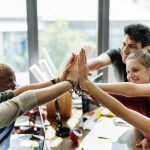