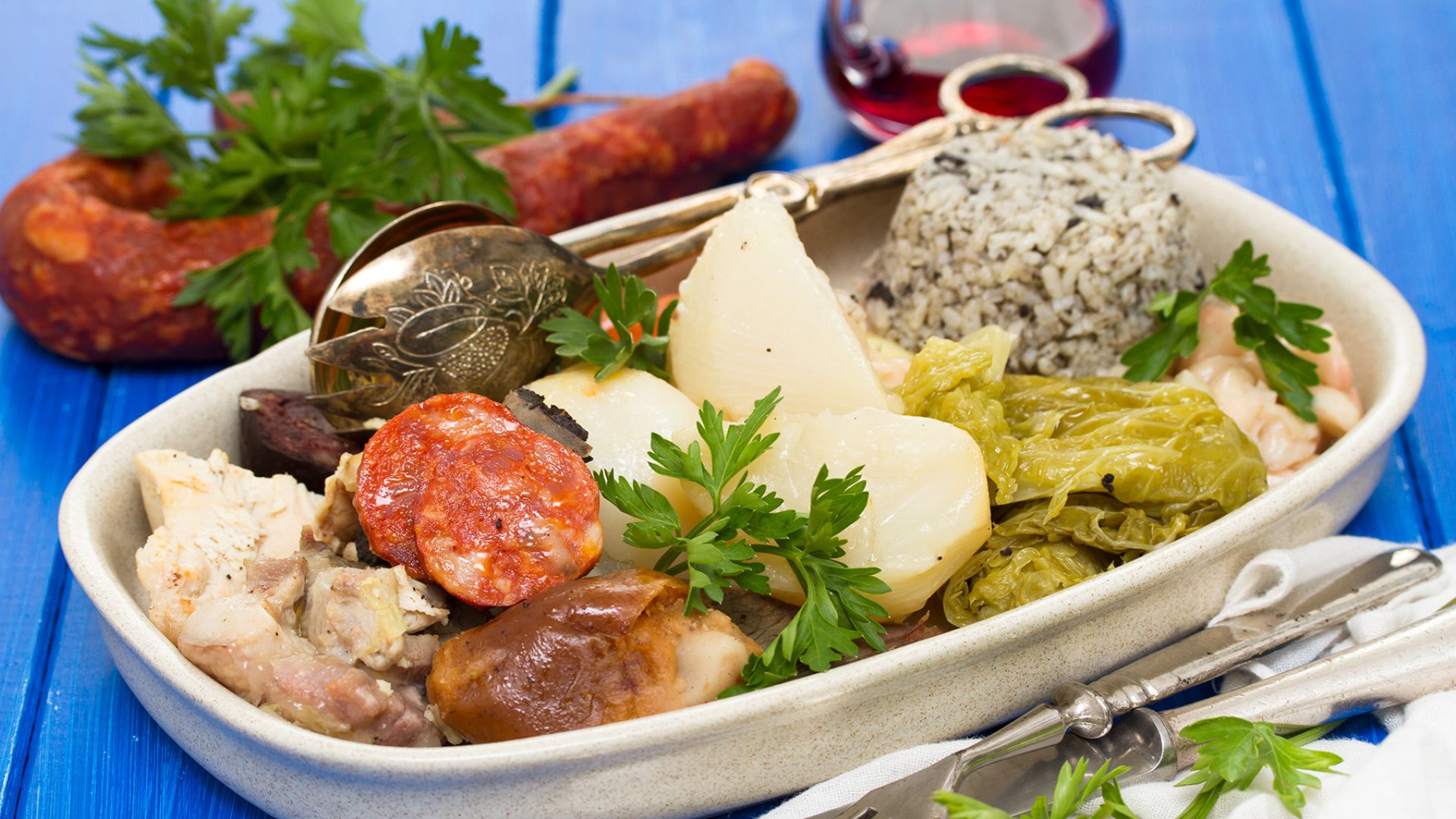 From salted codfish and hearty stews to baked desserts and more, we share some top Portuguese foods with recipes so you can make them yourself.

Portugal’s top dishes are world-famous for being tasty yet distinctive. The country’s food showcases its history too; from the invasion by the Moors in the eighth century to its days as a maritime colonial power beginning in the 15th century. Portugal’s geography also plays a key role in local cuisine. With the ocean surrounding the country on two sides, it’s no surprise that seafood generally tops the menu. As you travel around, you will find plenty of regional versions of many popular Portuguese dishes. However, there are some regional specialties to seek out, too.

Traditional Portuguese cuisine is based on fish, seafood, and meat (especially pork) which is grilled, fried, or cooked up in stews and casseroles. Common side dishes include potatoes, rice, and simple salads. The country is also well-known for its rich and sweet desserts. To give you an idea of what culinary treats are in store, here are some of the top dishes that you are likely to discover, along with recipes to try at home.

Do you know your bacalhau from your caldo verde? Take your Portuguese cooking further with the language-learning app Babbel. Its range of professionally-made Portuguese language courses will get you reading Portuguese recipes before you can say pastéis de nata. Download Babbel today and get stuck in.

The Portuguese have a sweet tooth, and local bakeries and pastry shops are full of all sorts of delicious delights. Local desserts are often egg-based and sometimes creamy, but all of them are rich and sweet. It is common to enjoy rich, egg-based desserts, flavored with cinnamon and vanilla, at the end of a meal, too. Look out for leite crème; an egg custard with a hard caramel topping like crème brûlée, and arroz doce; a traditional Portuguese rice pudding. This homey, sweet, and creamy dessert can be made with condensed milk or egg, but is always flavored with lemon and cinnamon.

The national dish of Portugal, bacalhau is dried and salted codfish, which is usually soaked in milk or water before cooking. The Portuguese have been eating bacalhau since the 16th century when their fishing boats brought it back from Newfoundland. It is so popular that is has the nickname of fiel amigo or ‘faithful friend’. Furthermore, the locals even sing about it in folk songs. Most locals eat bacalhau, in some form, at least once a week and each region has its own version of the dish.

In fact, some say there are 365 different recipes – one for every day of the year. You can enjoy it baked with cream (bacalhau com natas); cooked with potatoes, carrots, cabbage, and egg (bacalhau com todos); or stir-fried with shredded potato, eggs, onions, and topped with black olives (bacalhau à brás).

Most meals in Portugal involve a soup dish. While fish, bread, and cold tomato soups are quite common, the most famous is caldo verde which comes from the Minho Province of northern Portugal. This heart-warming green soup traditionally consists of just five ingredients: potato, onion, thinly sliced kale, olive oil, and chorizo sausage. Hearty, cheap, and the ultimate comfort food, this national favorite can be found almost everywhere in Portugal; from the trendiest restaurants in Lisbon to the remote farmhouses in the villages. It goes down wonderfully with broa, a type of Portuguese cornbread with a crusty exterior and soft interior.

Cataplana de Marisco is a popular fish or seafood stew that takes its name from a clam-shaped copper pot called a cataplana. The Moors introduced the dish in the eighth century when they arrived in Portugal from North Africa. Cataplana is actually the regional dish of the Algarve. Although the ingredients vary throughout the country, it usually includes white fish, shellfish, red peppers, onions, and a bit of chili. This is all combined inside the cataplana and the lid is firmly closed before it is steamed to perfection. This delicious stew is best enjoyed with fresh crusty bread, rice, or fries.

This rustic Portuguese stew is an absolute must-try for meat lovers. Numerous regional variations of cozido à Portuguesa exist throughout the country, but it usually consists of beef, pork, chicken, and assorted smoked sausages; such as morcela, chouriço, alheira, or farinheira. It might also contain various other bits of animal – perhaps a pig’s ear or foot­ – with some potatoes, carrots, and cabbage thrown in for good measure. All the ingredients are cooked together in a single pot with different ones added at different times. The result is a rich and satisfying dish that the Portuguese consider part of their heritage and a national treasure.

Portugal’s favorite fast food, frango no churrasco, literally translates to ‘chicken on the barbeque’. It is also sometimes called frango no brasa, which means ‘chicken on hot coals’. You can buy this delicious snack as a takeaway from small roadside shops all over Portugal. However, don’t expect it to taste like KFC, as this tasty treat is far from junk food. It is cooked in a particular way with delicious marinades made from secret recipes. Whole small chickens are spatchcocked and marinated in olive oil, lemon, garlic, white wine, and spicy paprika. They then go on a rotating spit over a coal pit. While the chickens roast, they are continually basted with the marinade and the famous Portuguese piri piri chili sauce, which keeps them juicy. The smoky, spicy, sweet chicken is usually then served with fries, salad, bread, or rice, and a nice cold bottle of beer.

Portuguese cuisine features a considerable amount of pork and Porco Preto (Iberian black pig). It is primarily found in the central and southern regions and is reared free-range, often on a diet of acorns. The resulting sweet-tasting, moist pork can be braised, chargrilled, pickled, and added to soups and bread. The mother of all Portuguese pork dishes, though, is roast suckling pig; or leitão assado da bairrada. You will discover this on menus all over the country. Traditionally, the skin of the pig is rubbed with a mix of garlic and pig fat, seasoned with coarse salt and pepper, and skewered on a pole. It is then roasted and basted until the intensely flavored meat flakes away from the bone and the skin is golden orange and crisp. You will usually eat it with batatas fritas (fries) and lettuce, tomato, and onion salad (salada mista).

Small, round, and utterly delicious, pastéis de nata is the famous Portuguese custard tart. This iconic dessert consists of crisp puff-pastry cases filled with egg custard and sprinkled with powdered sugar and cinnamon. Pastéis de nata originated in the Jerónimos Monastery in the Santa Maria de Belém area of Lisbon. Historically, monks used egg whites to starch their clothes and then the leftover yolks to make cakes and pastries. They sold the recipe to the neighboring sugar refinery when the monastery, along with all the other convents and monasteries in Portugal, closed in 1834. The company started baking the famous Pastéis de Belém in 1837 and continues to do so today. You will find these heavenly tarts in bakeries all over Portugal as well as Macau. They taste best warm and straight from the oven.

Portugal produces many kinds of cheese, mainly from sheep and goats. Usually, they are not for cooking but rather eaten on their own before or after a meal. Queijo da Serra is Portugal’s most famous cheese and comes from the mountainous region of Serra da Estrela. The primary ingredient of this mild and salty cheese is unpasteurized ewes milk and producers use thistle to coagulate the milk. When queijo da Serra is young, it is so creamy that you can almost spoon it out of the rind and when it’s older, you can slice it and enjoy it with a glass of Port wine.

Chargrilled sardines are synonymous with Portugal. The Portuguese eat them fresh from the Atlantic Ocean, all year round, but especially in the summer. There is even an annual sardine festival in Lisbon, the Feast of Saint Anthony, on June 13. On this day, the sounds of song and celebration fill the air as locals tuck into tasty sardines. The sardines are first coated with salt and then cooked over a hot charcoal grill. You can then eat them whole, with their crispy skin and all. Portuguese sardines are typically served on a simple slice of bread which soaks up all the delicious juices. Alternatively, they can be eaten with boiled potatoes and a salad of grill-seared pepper, tomato, onion, and lettuce with oil, vinegar, and salt. 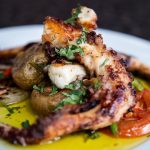 A guide to traditional Portuguese cuisine