Test your Belgian knowledge with these top 30 Belgian facts – did you know the Big Bang theory and the game of cricket originated in Belgium?

How well do you know Belgium? Here is a mix of informative, interesting facts to prepare you for visiting or living in Belgium. See how many of these top 30 Belgian facts you know.

It was a Belgian, the priest and physicist (apparently not a contradiction in terms) Georges Lemaitre, who first came up with what is now called the Big Bang theory of the origin of the universe in 1927. The theory is often attributed to Edwin Hubble, although records show Lemaitre published a similar theory two years before Hubble.

Brussels South Charleroi Airport is the most punctual airport in Europe

It is ranked as the world’s second best airport for on-time performance, just behind Japan’s Osaka International, in OAG’s punctuality report.

Cricket is thought to be a Belgian invention, not British

Academics believe immigrants from north Belgium could have imported the game to Britain, based on a poem thought to have been written in 1533 that calls Flemish weavers ‘king of crekettes’ and also mentions ‘wickettes’, predating English references dating to the 1600s.

Belgian men are the second tallest in the world

The Signal de Botrange on the High Fens plateau in far-east Belgium is the highest point at 694m, shorter than the world’s tallest building in Dubai, the Burj Khalifa at 828m. Belgium along with the Netherlands and Luxembourg are historically known as the Low Countries.

Belgium introduced same-sex marriage in 2003, after the Netherlands. Euthanasia was also legalized in 2002.

With a construction area of some 26,000sqm, it is bigger than St Peter’s Basilica in Rome by 5,000sqm. On the topic of construction, the façade of Brussels’ Royal Palace is 50 percent longer than Buckingham Palace.

Belgians are accredited to inventing the Body Mass Index (BMI), the saxaphone and plastic

Among a number of other world-changing inventions, such as co-designing the World Wide Web, Imodium, inline skates and a safe contraceptive pill. Read about the top inventions you didn’t know were Belgian.

Belgians pay among the highest tax rates in Europe

Which amount to some 57.8 percent for the highest earners, according to the CGI report, which ranked Belgium’s tax rates as fourth highest in Europe after France (66.6 percent), Italy and Spain, while OECD ranks Belgium third highest for tax rates out of its 34 members. Belgium’s tax revenue is among the highest in Europe representing around 48 percent of the country’s GDP.

Known as the Torengebouw in 1928 in Antwerp. It is still the tallest building in Antwerp today at around 96m (26 floors).The art-deco edifice, now known as Boerentoren or KBC Tower, was the tallest building on the continent until 1940 when Terazza Martini Tower opened in Genoa, Italy. Belgium is also attributed to having Europe’s oldest shopping arcades, The Galeries St Hubert, which opened in Brussels in 1847.

The name ‘Belgium’ comes from the Romans

When they called their province in the north of Gaul Gallia Belgica, after its previous inhabitants the Celtic and German Belgae. Belgium’s official name today is the Kingdom of Belgium, known in the country’s three official languages as Koninkrijk België (Dutch), Royaume deBelgique (French) and Königreich Belgien (German). King Philippe of Belgium is the current monarch.

The Belgian divorce rate is the highest in Western Europe

Only Latvia and Lithuania surpass Belgium’s divorce rate, which is estimated at around 70 percent. Around two-thirds of all marriages in Belgium are between first-time couples, while in the remaining third at least one person has been divorced.

Is the birthplace of the famous comic book series The Smurfs (Pierre Culliford) and The Adventures of Tintin (Hergé), the latter which has been translated into more than 100 languages. An original cover from Tintin In America became the world’s most valuable when it sold for EUR 1.3mn. Today visitors can walk Brussels’ comic strip trail.

Belgium was without a government longer than war-torn Iraq

Belgium took the record from Iraq for the longest government formation in history when parties took 541 days to form coalitions, plus 48 days to finalize government positions. The Belgian government is also known for dethroning its king for 36 hours in 1990, at the king’s request, to pass a pro-abortion law the king was against and didn’t want to sign.

The Kusttram travels the full 68km of Belgian coast between the French and Dutch borders, making some 68 stops from Knokke-Heist to De Panne and running every 10 minutes during summer peak hours.

Today four of his town houses in Belgium are designated UNESCO world heritage sites; one is a now museum and the others were hotels. He was also involved in the development of the Art Deco movement.

Belgium has the largest urbanized population in Europe

Where 98 percent of the population live in urban areas and cities, also among the highest rate in the world. Belgium is also one of the most cabled countries in the world, where some 97 percent of Belgian households receive cable TV.

Belgium’s highway can be seen from the moon

The almost 100 percent-lit highway network is one of the few man-made structures seen that far at night. Belgium is among the top 10 countries for the highest road and railroad density, although TomTom ranks Brussels as the seventh most congested city in Europe.

Europe’s first modern health resort and casino ‘la Redoute’ opened in Spa in the 18th century, although the famed springs have been reportedly used for health and healing purposes as far back as Roman times.

Belgian Luc Luycx’s design was the chosen winner of a European Union design competition. See if you can spot his connected initials ‘LL’ on all numerical sides of euro coins.

Famous Belgian tour winners include Eddy Merckx and Philippe Thys. Merckx is the only cyclist to have won the general, points and king of the mountains classifications in the same tour, and is among a small group of cyclists who won a tour on their first attempt.

Tomorrowland is the largest electronic dance music festival in the world

It was also voted as the world’s best festival by DJ Magazine and its youtube channel has more than five million subscribers. Alongside some 15 stages and 400+ performers, the festival is known for impressive stage design and tickets sell out months in advance and is aptly located near a Belgian town called Boom.

Brussels has hosted some of Europe’s most known exiles

After being expelled from France, Karl Marx wrote The Communist Manifesto in Brussels in 1848 with Friedrich Engles, and French author Victor Hugo also worked on Les Miserables while living in Brussels in exile in 1851.

Belgium has more castles per kilometer than any other country in the world.

After conquering much of continential Europe in the early 19th century, French military leader and emperor Napoleon Bonaparte was defeated in 1815 by allied forces, ending the Napoleonic era of European history, the Napoleonic Wars, and Napoleon’s Hundred Days’ reign. Visitors can see Napoleon’s and other war artifacts at the site today.

Belgium has been producing chocolate for almost 400 years

The first evidence of chocolate production in Belgium dates back to 1635. Today Belgium produces over 173,000 tons of the stuff a year, and has an estimated 2,000 chocolate shops.

Antwerp is the world’s diamond capital

With an estimated annual turnover of more than EUR 20 billion, around three times more than the next competitor (US). Diamonds have been traded here since 1447, and today the city handles more than 80 percent of the world’s rough diamonds and 50 percent of all cut diamonds. The Flemish jeweller Lodewyk van Bercken is credited to inventing the first pear cut diamond and the polishing wheel (scaif), which uses diamond dust to cut diamonds to achieve greater precision and more complex cuts. His statue can be seen near Antwerp’s diamond district.

Belgium is the world’s leading exporter of billiard balls

Nearly 80 percent of the world’s billiard balls are made in Belgium. Saluc AC, established in 1923, has its own chemical plant to make the phenolic resin, which give Aramith balls their characteristic high-gloss, rock-hard finish. 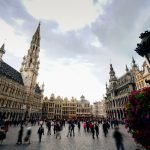