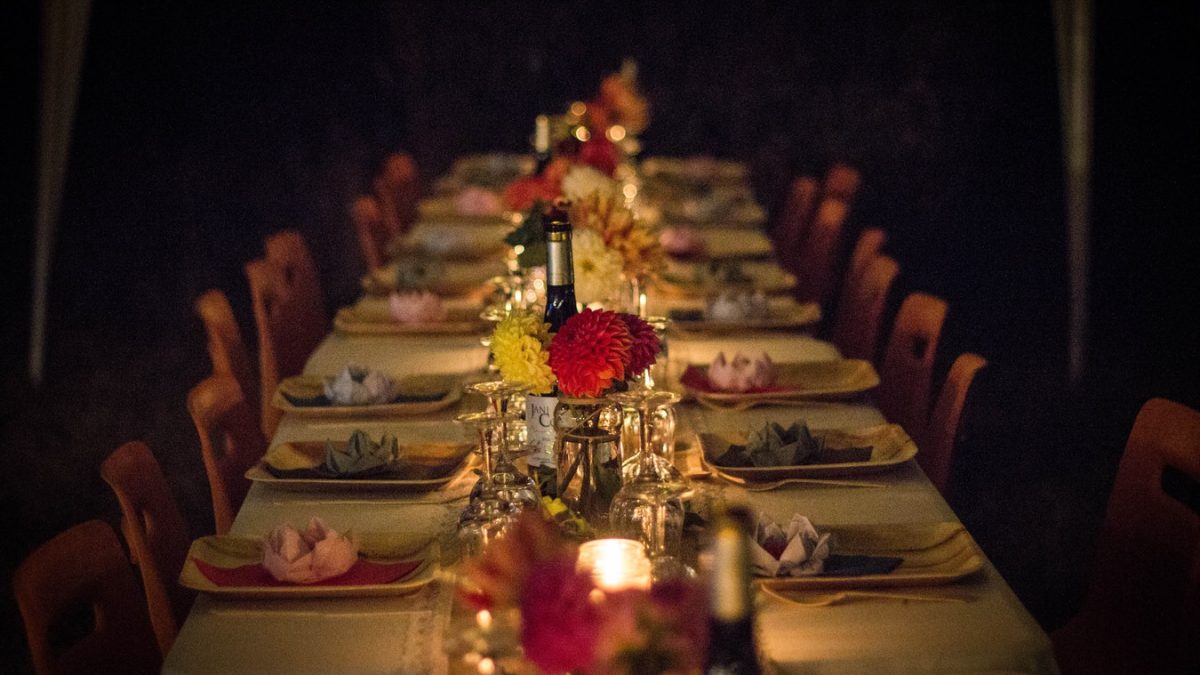 Explore some of the tastiest traditional Belgian foods and ingredients and learn how to prepare a Christmas full of Belgian cheer.

During the holiday season I was über lucky to be invited to Christmas dinner with a local Belgian family and to experience the holiday season true Belgian style. In Belgium, Christmas is typically celebrated at home with a delicious meal; and I was treated to a traditional Belgian meal from preparation right down to the dessert.

As part of my Christmas present from Billy, I was given an awesome cookbook ‘The Food and Cooking of Belgium‘ by Suzanne Vandyck and the following is what I have learned from reading and eating (until I could eat no more).

Getting started with a Belgian Christmas

Typically, the Christmas meal begins with aperitifs, a boozy beverage to share a ‘toast’ with family members and guests. The aperitif is fairly bitter in order to stimulate appetite for dinner as opposed to a sugary drink that ‘closes’ the stomach.

The main course is often game, goose, duck, turkey or roast lamb, accompanied with a variety of vegetables and a potato dish.

The Billiau Christmas dinner featured many ingredients that are common in Belgian cuisine. Historically, since the Middle Ages, Belgian food followed ancient practices such as including a variety of mustards and spices in dishes. Over the years (centuries really), Belgian chefs have remained loyal to traditional Belgian dishes while being open to incorporating new ideas that will enhance their meals.

The following list features classic ingredients in Belgian cuisine. Each different ingredient complements the other, resulting in a lot of creative and tasty dishes.

Belgians love shellfish, especially mussels (moules), which are considered to be a national dish. A wide variety of fish species are brought in from the fishing boats into ports such as Oostende. Seafood is always fresh and plentiful offering a variety of choices such as cod, sole, herring, turbot and monkfish, along with freshwater fish like trout and eel.

Meat is an important feature of Belgian dishes. Pork, beef and veal are used often, as well as chicken, pheasant, venison, wild boar and rabbit. Meat is prepared with the addition of specialty beers or a combination of fruit and spices, which complement the meat.

Despite being a small nation, Belgium produces more than 300 varieties of artisan cheese and dairy products that are enjoyed by Belgians instead of being exported. They go perfectly with bread and beer.

Belgium’s climate and geography have contributed to the availability of many different types of vegetables. White asparagus, Brussel sprouts, celeriac, kohlrabi, hop shoots, potatoes, and mushrooms are just a few.

A popular use for potato is for the famous Belgian frites (fries). Frites can be served with ritzy dishes like mussels on a silver plate during Christmas, besides also being served as a street food in a paper cone with lots of sauce.

There are some veggies that are unique only to Belgium. A special vegetable is the Belgian endive (witloof), which has white leaves and grows from the chicory root. It is typically a winter vegetable and a feature on seasonal dishes.

Apples, pears, blueberries, cherries and sour cherries, peaches and plums are abundantly available in Belgium at this time. Apples are often used as an accompaniment with poultry, game and sausage dishes. Cherries can be used in many ways such as in meat stews and beer.

According to Suzanne Vandyck, “Pickles, mayonnaise and mustards are Belgium’s most beloved trio of condiments, indispensable at any Belgian table or pantry, and used to enrich appetizers, soups, meat, and vegetable dishes and a multitude of sauces.”

I have fallen in love with mustards in Belgium because they are spicy and give a certain little kick to any meal or snack. The amount of different sauces available is actually astounding and makes it easy for anyone to add a bit of their own personality to the meal.

Bread comes in a wide variety of grains and are commonly enjoyed as a meal combined with cold meats and cheeses. Bread is very important in Belgian cuisine and is usually present at every meal. I’m talking about a fresh soft baguette that is perfect with just butter — no yucky preservatives here. And don’t get me started on the deliciousness of Belgian broodjes (sandwiches).

Belgian chocolate is among the best chocolates in the world, thanks to a very meticulous chocolate process where no preservatives, artificial flavors or coloring are ever used, resulting in high-quality chocolate. Chocolate is enjoyed in many different forms such as pralines, candy, desserts, or even as a bread spread.

Beer in Belgium rocks my world. Belgium is equally famous for its beers as it is for chocolate. There are more than 500 types of beer and around 130 breweries. There are pilsners such as Stella Artois and Jupiler, Trappists and ales like Chimay or Westvleteren, and a wide variety of ales. But even with such great variety, there is a unifying factor: the alcohol content is commonly around 7–8 percent. Whooopah!

If I am not drinking beer, I am drinking wine. I haven’t been to a grocery store that didn’t have a wide selection of high quality, decently priced wine compared to what I paid in Canada. A bottle of wine is carefully selected to complement the flavors of the meal. For special occasions, it is common to have two or three different bottles to be paired with certain courses.

The juniper-infused grain alcohol called jenever is very popular in Belgium (especially at Christmas). It is usually drunk in a shot glass in the evening as a nightcap or in a shot of espresso. Jenever is also used in cooking as a flavouring agent, offering approximately 200 different flavours such as cactus, passionfruit, and mocha.

This is just some of what I have learned about Belgium food during my time here, but there is still so much to learn and so many recipes to try. What’s your favourite Christmas or Belgian dish?