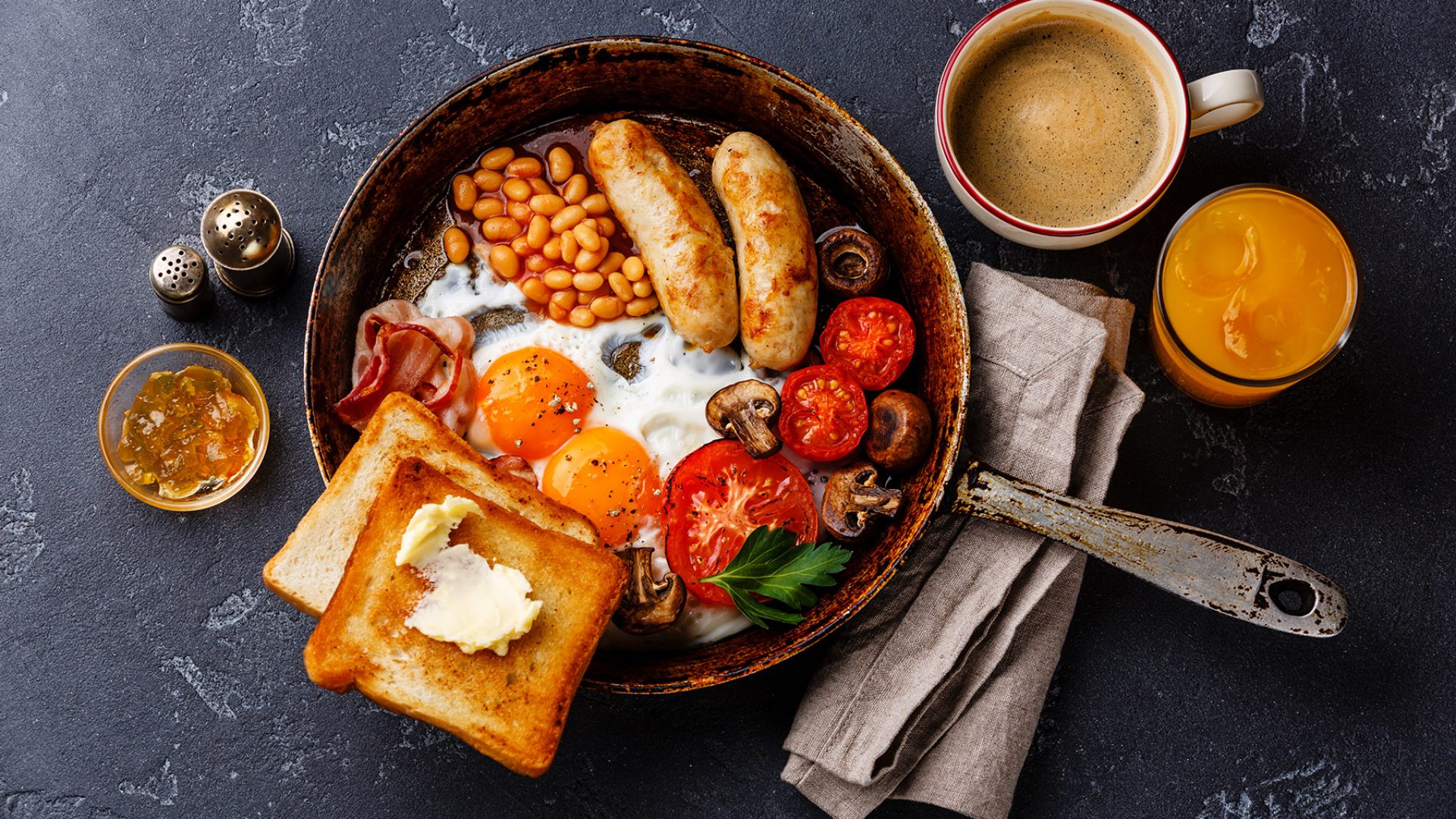 Get ready to drool as we tuck into some of the most delicious British foods that are guaranteed to tantalize your taste buds and warm the cockles.

British cuisine has a reputation for being heartwarming, filling, and satisfying to the palate. And while many people in the UK enjoy tucking into pasta, pizza, and dishes influenced by Indian and Chinese cultures, classic British foods remain a popular choice. So why not follow these tasty recipes and whip up some great British comfort food in your kitchen.

Want to create these classic British dishes in your own kitchen? HelloFresh is a leading meal-kit provider that delivers innovative recipes from the UK and around the world straight to your doorstep. Choose from a range of recipes and let HelloFresh transform mealtime for you and your family.

1. Roast (with all the trimmings)

Once upon a time, families in the UK would sit down together on a Sunday and enjoy a big roast lunch. Although this tradition has waned somewhat over the recent years, the roast remains a popular meal in the UK. The delicious feast consists of roasted meat (beef, chicken, lamb or pork) and a selection of vegetables. These might include roast potatoes, carrots, peas, cabbage, and Brussels sprouts. A roast may also include stuffing and Yorkshire puddings; a batter of eggs, flour, and milk which rises in the oven. Roast beef is traditionally accompanied by a peppery horseradish sauce and English mustard. Roast pork, on the other hand, comes with apple sauce. And roast lamb always comes with mint sauce or redcurrant jelly. Whatever trimmings you add, though, the gravy is arguably the most important part. This usually contains the meat juices and a splash of red wine.

Brits have been eating fish and chips since the 19th century. This beloved British street food is traditionally served wrapped in a piece of white paper or newspaper. Most people enjoy eating it with their fingers. However, nowadays, the local chip shop or chippie is more likely to serve it in a polystyrene dish; with a little wooden fork. The fish, which is usually cod, haddock, or plaice, is dipped in batter and deep-fried. Similarly, the chips are cut thicker than French fries and deep-fried twice; once to cook the potato, and then to crisp up the outside. Most people enjoy their fish and chips with a generous sprinkling of salt and malt vinegar or some curry sauce. But if you really want to go British, enjoy it with a pickled egg or onion or a giant pickled cucumber (called a ‘wally’).

The UK is famous for its heart-warming pies, but the most comforting of these is undoubtedly shepherd’s pie. This popular winter-warmer is the perfect family meal and very easy to make. It simply consists of minced lamb cooked in gravy or sauce with onions and topped with a layer of fluffy mashed potato. The recipe has many different variations, and you can add other vegetables such as peas and carrots to the filling. Some people also add a layer of grated cheese on top of the potato for extra flavor. According to early cookbooks, people created the dish as a cheap and easy way to use up leftover meat from the Sunday roast. If you aren’t a fan of lamb, though, you might prefer shepherd’s pie’s cousin, cottage pie; this uses minced beef instead.

Get ready to loosen your belt buckles because nobody does breakfast quite like the Brits! The Full English (or fry up) consists of fried or grilled bacon, a sausage or two, a fried egg, baked beans (in tomato sauce), grilled or fried tomatoes, and a slice of fried bread (or toast). Some people might also throw a slice of fried black pudding (sausage made from pig’s blood) and fried mushrooms into the mix. That’s a lot to stomach, but in reality, people don’t eat this every day; but rather eaten as a treat every now and then. The full English is among the most internationally recognized British foods and it remains a popular menu item in pubs and cafés in the UK. Its origins date back to the Anglo-Saxon days in the 13th century; when households would provide hearty breakfasts for visiting friends and family.

The term ‘banger’ originates from World War II. It is attributed to the fact that sausages made during this time were likely to pop under high heat when cooked. This was because meat was scarce so people would add high volumes of water to beef them up. One of the most popular British foods is bangers and mash, which you will find in pubs. The dish consists of a flavored sausage made of pork, lamb, or beef, served with a pile of mashed potatoes. It sometimes comes with onion gravy, fried onions, or peas. Many regions in the UK, including Yorkshire, Suffolk, Gloucester, and Cumberland, have their own style of sausage. The classic Cumberland sausage, from Cumbria in the north of England, is a popular choice. This long, coiled sausage is made from chopped pork and seasoned with pepper.

Scotland’s national dish, haggis, is certainly not for the faint-hearted. It is essentially the stomach of a sheep (or an artificial casing) stuffed with a mixture of chopped sheep’s heart, liver and lungs, oatmeal, onions, suet (fat), stock, and seasoning. It is common to eat it with neeps and tatties (boiled and mashed swede and potato) and a dram (glass) of Scottish whiskey. People traditionally eat haggis on Burns Night, on January 25. This is the birthday of Scotland’s national poet Rabbie Burns; who wrote ‘Auld Lang Syne’ and the poem, ‘Address to the Haggis’. While it might not sound very appealing, haggis is actually a very popular British food. This is largely due to its rich flavor and nutty texture. You can buy it in almost any supermarket in Scotland, and fast-food chains sometimes serve it in the form of a large, deep-fried sausage.

This simple British food consists of chunky bread, cheese, and pickles. It dates back to the humble days when rural laborers lived on a simple diet of bread, cheese, leeks, and onions. Farmworkers in Devon would often enjoy this with cider as their midday meal, too. Nowadays, the ploughman’s lunch is enjoyed with additional items; these might include ham, hard-boiled eggs, green salad, fruit, and perhaps a British beer. The name ‘ploughman’s lunch’ actually comes from a 1950s marketing campaign to promote the dish in pubs and increase cheese sales after rationing ceased. This popular lunchtime snack is still strongly associated with pubs in the UK today. It usually includes two of Britain’s most famous types of cheese. These are Cheddar and Stilton, but other varieties include the Welsh Caerphilly, Wensleydale, Red Leicester, Double Gloucester, and Cornish Yarg.

Similar to shepherd’s pie, this hearty stew is made from mutton or lamb and vegetables, topped with sliced potatoes. One of the main differences, however, is that you cook it in a heavy pottery dish used to make casseroles. The dish is cooked very slowly under low heat to ensure that the meat is succulent and tender. The dish originates from the northwest of England and dates back to the era before industrialization. During this time, families would work at home and had time to attend to cooking over many hours. Simple to prepare and cheap to make, Lancashire hotpot remains a popular British food, especially during the colder winter months. People often eat it with pickled red cabbage or beetroot. Similar stews are scouse from Liverpool, Irish stew from Ireland, and cawl from Wales.

Most of the traditional British desserts are not for those watching their waistlines, but they sure are delicious! The Brits love their sweet after-dinner treats, and the most popular of these is arguably apple crumble. This consists of peeled, cored, and sliced Bramley apples covered with a crumbly breadcrumb mixture; made from flour, sugar, and butter. This delightful dessert is baked in the oven until the crumble turns a golden brown and the apples are soft. The dessert is often served with vanilla ice cream or custard made from eggs, milk, and vanilla. Other popular fruits that are often used in crumble include blackberry, peach, rhubarb, and plum. The topping may also include rolled oats, ground almonds, or other nuts.

We’ve saved the sweetest till last! The quintessential British afternoon tea wouldn’t be complete without tea and scones. This teatime treat consists of a pot of tea – preferably Earl Grey – with either lemon or a dash of milk; plus scones. These are dense, bread-like cakes made from flour, butter, and milk. They traditionally come with strawberry or raspberry jam and clotted cream; a rich yellow cream with a crusty top. You simply cut the scone in half, spread it with jam and clotted cream, and enjoy. This iconic British food is associated with the southwest of England; especially Devon and Cornwall, where you will find it in numerous cafés and tearooms. Popular investments in the UK