Going to a public toilet in the Netherlands is not like elsewhere – if you can find one. Amanda van Mulligen investigates the inconvenience of Dutch toilets.

Most of us have been there. Fiddling around in pockets, purses, and bags for a few loose coins, waiting in lines that seem endless, and searching the high street for a franchise restaurant or running into the nearest café.

Public toilets in the Netherlands

The strangest aspect of the public toilet process in Holland is paying everywhere you go. In shopping centres, department stores, service stations and bars there is a price tag on a visit to the porcelain potty. The Dutch take spending a penny quite literally and they have converted it to a minimum of 25 euro cents.

Pay on exiting the bathroom

Outside Dutch public toilets you’ll find a chair and a table. A round white plate placed in the middle of the table, laden with a small selection of coins. Sometimes the plate has a partner-in-crime, a piece of cardboard displaying the exact price of a visit to the lavatory. A toiletjuffrouw takes her or his place on the chair, and ensures that all guests to the premises are paying ones. A toilet ‘bouncer’ if you like.

Toilet finance etiquette dictates that under normal circumstances you pay on exiting the bathroom area. Under extreme circumstances, such as big events commanding long queues, the toilet attendant(s) can no longer keep track of who has paid, and therefore may demand payment on entrance.

Parting with your hard-earned cents for a toilet visit should mean that the restroom area is clean and kept well-stocked with toilet paper, hand towels and liquid soap.

Well, it seems not even paying for using a Dutch toilet guarantees you good hygiene. The cleanliness of Dutch public toilets is not something to shout about – just one in four toilets are properly cleaned – but there is light at the end of the tunnel.

According to research done by Service Management (the professional publication for the cleaning industry in Holland), toilets have reportedly been getting cleaner in the Netherlands; although in their last report (2016), only 27% of the 150 public toilets investigated were classed as really clean, down from 38% the year before. But it is still a big improvement from earlier years; in 2006 it was only 12%.

Women’s facilities tend to be cleaner than men’s, a result that may not surprise anyone who has ever had the joy of walking past a men’s restroom. Only 16% of toilets in public buildings, such as stations and sports centres, passed the test, and less than 30% of toilets in department stores, garden centres and DIY shops were considered clean. Top of the class were hospitality and hospitals where around a third of the toilets were spick and span.

I’m a Brit, and the concept of paying for the toilet was alien when I moved to the Netherlands in 2000. Now it is just irritating.

Paying for the toilet in the UK

My only recollection back home of paying to frequent the ladies is at a London mainline railway station, a highly automated process with coin-operated turnstiles. Imagine my consternation to find a person lurking outside every public bathroom in the Netherlands – even in the bars where paying customers have to delve into their purses for the pleasure of winding up in a cubicle with no toilet paper after a long wait in the queue. Among the Dutch partygoers themselves, the toilet toll is a great source of annoyance, particularly among the male population.

To be fair, the Netherlands is not unique in asking for money for what can only be described as a bare necessity. Its European neighbours do not fare much better in the toilet penny-pinching stakes. Some Belgian service stations even have a scheme where you pay fifty cents for toilet and in return you receive a voucher of the same amount towards any purchase in the attached shop. Similar imaginative schemes are in use in the Netherlands, too. In the popular beach pavilion Parnassia in Overveen, the voucher you receive in return for fifty cents is redeemable against consumptions in the restaurant.

Second only to my frustration of paying for the toilet, is the fact that public conveniences in the Netherlands are relatively hard to come by. I still have night terrors about loo hunting when I was pregnant with a bladder that couldn’t hold for more than 10 minutes at a time. I remain of the opinion that all women living in the Netherlands should receive a toilet fund from their health insurers – 25 cents every 10 minutes sure adds up.

I do not stand in isolation with my gripe. Linda, a Dutch national, states that aside from the toilets in the department stores she cannot recall ever seeing a public toilet in the Netherlands.

Lars, also Dutch, commented, “The more travelling I do, the more I realise that the public toilet situation in the Netherlands is appalling. In other countries toilets are free, more widespread and they seem to understand that needing to use the toilet is part of human nature!”

How did we get here? Stichting De Ombudsman is an independent organisation that looks into judicial questions, among others in the area of consumer rights. In 2002, the Ombudsman concluded that a price clearly displayed in retailer’s toilets, deemed public areas, could oblige a customer to pay to use the WC. Two years later the same body concluded that café and restaurant owners could also charge for the use of their toilet facilities, seen as private bathrooms, although no one could force customers to hand money over for their use.

However let’s face it, not even half a euro will stand in your way if the need is great. The key as always is acceptance; pay up or cross your legs until you get home.

Reprinted with permission from The Writing Well.

Amanda van Mulligen, British born, has been living in the Netherlands since 2000 and owns Turning Dutch, where she scribbles about her expat way of loving, living and parenting. Originally reprinted from The Writing Well 2008; updated 2016. 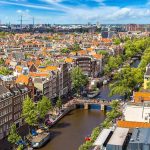