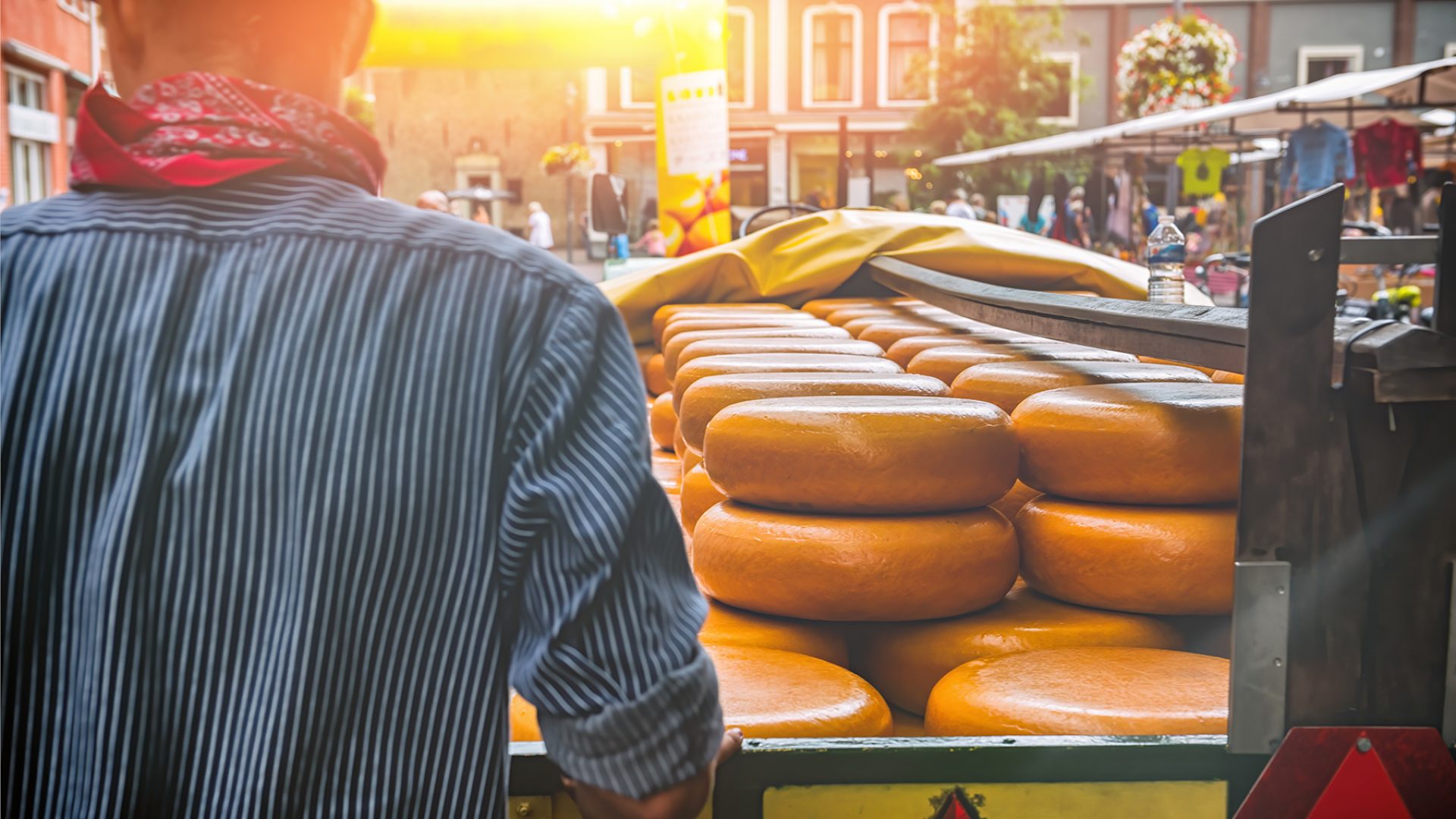 Tradition runs deep at Dutch cheese markets. Discover some of the best in Alkmaar, Edam, Gouda and Woerden.

The Netherlands is known for several of its cheeses. And what better way to celebrate this than spending a day out at a cheese market? There are many cheese markets in the Netherlands – if you’re living in Amsterdam then some of the easiest to get to are Alkmaar, Gouda, Edam, and Woerden. All of these sell top-quality local cheese, and some double up as a tourist attraction.

The best time to visit cheese markets is during the summer, when you can wander around the open-air stalls. They’re free to visit, and many take place in gorgeous old towns with plenty to do. Walking around and sampling the cheeses is also a fun way to spend an afternoon with the kids. So read on to find out about Dutch cheese markets and what else is on offer in these wonderful towns.

Visiting cheese markets in the Netherlands

Dutch cheese markets are part of a rich tradition. Since medieval times, Dutch cheese farmers have been bringing their cheese to the market square to sell. Special teams (vemen) carry the cheese – which sometimes weighs over 160kg – in barrows. Each of these teams wears a different colored straw hat according to their guild.

Buyers sample the cheese – if they like it, they bargain with the seller using a ritual handshake, or clapping each other’s hands (handjeklap) and shouting the price. If they agree on a price, the porters carry the cheese to the weighing house (de Waag). Nowadays, cities that use this tradition are few and far between, but you’ll find these practices in some of the places below.

The most famous Dutch cheese market takes place every Friday morning and Tuesday evening in Alkmaar, North Holland. This cheese market is easy to reach by train and the journey takes 30–45 minutes from Amsterdam. It’s one of the oldest, most traditional cheese markets in the country. And it’s even more than that – it’s a spectacle of carriers hauling cheeses, surrounded by an arts and crafts market. Here, you can find real Dutch poffertjes, herring, farm cheese, a clog maker, and much more.

There are many ways to enjoy the atmosphere of Alkmaar. For example, you can enjoy a two-hour guided tour in which takes in a stroll through the medieval city center and the famous cheese market. Find out about the history of the town and about how the market evolved over the years, and choose a delicious piece of cheese to enjoy on the way home.

Other things to do in Alkmaar

Once you’ve seen all there is to see of the market, why not take a walk around the rest of the town? Alkmaar is home to more than 1,000 monumental buildings and is also great for shopping.

If you can’t get enough of cheese, visit the Dutch Cheese Museum, in the old weighing house. It’s a great place to find out more about how cheese is made and the history of the cheese market. Other museums in the city include the Beer Museum De Boom, a former brewery where you can learn about beer and try some locally brewed samples. And for a more general history of the city, don’t miss the Stedelijk Museum Alkmaar.

Farmers from the local area bring their cheese to the market every Saturday morning in the small town of Woerden, near Utrecht. It takes about 15 minutes by train from Utrecht, and about 40 minutes from Amsterdam. At Woerden cheese market, you’ll witness something very important – the prices charged here determine how much Dutch Farmers’ Cheese (boerenkaas) will cost on a national level.

There is plenty to see at Woerden’s weekly cheese market. This includes a program of cheese-tasting and an hour-long ‘tableau vivant.’ There are exciting events throughout the summer, such as Grass Cheese Day in June and the historical cheese market in August, when people dress up in costume and bring cheese to the market by horse and cart. Don’t miss the Woerden cheese song and the tug-of-war between farmers and traders at the close of day.

Gouda cheese comes from a city with the same name, located near The Hague. About 300,000 people visit the Dutch Gouda cheese market every year. The market takes place every Thursday morning from April until the end of August. It’s about an hour’s train journey from Amsterdam and just 20–30 minutes from The Hague.

Gouda cheese wheels are delivered to and from the market on wagonettes and weighed after sale in the monumental Gouda Weighing House. This building also houses a museum, where you can learn all there is to know about Dutch cheese.

Other things to do in Gouda

Although Gouda is famous for its cheese, don’t miss its syrup waffles and earthenware. It’s also a very picturesque city – its narrow streets are more than Instagram-worthy, as are monumental buildings such as the huge Sint-Janskerk and the town hall.

Edam, not far from Amsterdam, is an authentic old Dutch city. Its cheese market is an exciting day out, as it holds a traditional reenactment every Wednesday morning in July and August. Cheeses arrive at the market on horse-drawn carts and boats.

If you’re keen to visit Edam cheese market, it’s just a 30–minute bus ride from Amsterdam. It’s also a lovely village to explore on foot or by bike.