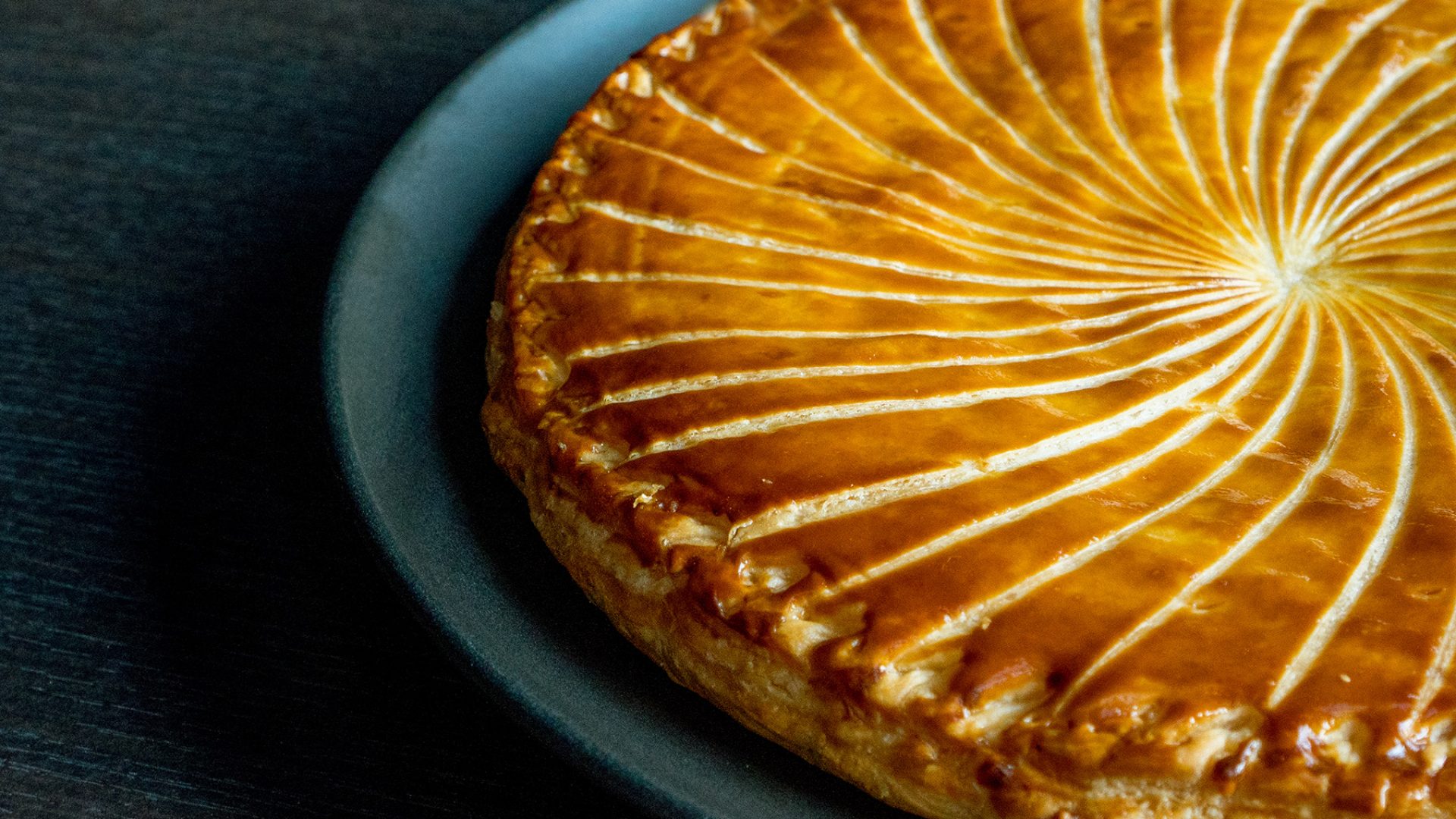 Galette des Rois is a beloved tradition in France – who will get the King cake baby? Find a galette recipe to make your own at home.

All over France in January millions of children excitedly bite into a flaky pastry cake hoping to come upon a tiny toy or trinket. This is the joy of France’s galette des rois and the exciting suspense of who will find the hidden king cake baby or other figurine.

Even in these play-safe times, when you might think parents would be reluctant to expose their child to a choking risk, the post-Christmas Twelfth Night tradition of sharing a galette des rois (Pancake of the Kings) shows no signs of flagging.

More than 30 million cakes are devoured in France in January, and millions more in neighbouring Switzerland, Belgium and Luxembourg, usually washed down with a bottle of fizzy cider.

Whoever comes upon the feve – a token or figurine hidden in the frangipane filling – is proclaimed the king or queen of the feast, and crowned with a cardboard diadem that comes with each cake.

The lucky monarch is supposed to be blessed with good luck for the New Year, but a recent survey found most French people cheat to make sure a child gets the honour.

Feve (pronounced ‘fev’) literally means a dried bean which was historically baked into the cake.

But by the late 19th-century the beans were replaced by porcelain figurines, some of which have become highly collectable.

To the horror of purists, more and more plastic charms are being used for the celebration, which traditionally marked the Christian feast of the Epiphany on 6 January, when the three Magic Kings were supposed to have visited the Christ child.

But in a small village in the Vosges region of Lorraine in eastern France two middle-aged sisters are doggedly holding out against the tsunami of plastic knick-knacks.

Christel and Muriel Nex are among the very last to make the feves by hand.

The pair turn out between 40,000 and 50,000 charms a year between them, with Christel telling AFP that “no two are ever exactly the same”.

“We don’t have any machines, and we want to keep up the quality, so we can’t increase our production any more than that,” the 51-year-old added.

Each clay feve takes several days to make from the moulding and sculpting to the painting and final firing.

In the past these tiny treasures were often passed down through families to be baked into the cake each year.

These days, however, the galettes des rois are rarely homemade.

The sisters took over from their parents in 2005 supplying bakeries across the country with a range of traditional and child-orientated figurines, many carrying company logos.

They range from little animals to the King cake baby Jesus and a Kama Sutra collection for the more daring.

With collectors always on the lookout for rareties, they introduce new designs every year.

The custom of hiding trinkets or coins in Twelfth Night cakes is not confined to France.

Similar traditions exist across Europe from the ringed Spanish roscon de reyes, to the Portuguese bolo rei and the Provencal gateau des Rois eaten in the South of France.

These brioche-style cakes decorated with dried fruit were clearly the inspiration for the ‘king cakes’ of the American Deep South and the Latin American rosca de reyes.

Historian Nadine Cretin believes the practice dates back to the Roman mid-winter Saturnalian feasts when a “king was elected by the throwing of dice to preside over domestic banquets”.

Parallel customs exist across Eastern Europe and the Balkans with the Greeks ushering in the New Year with the vassilopita (or king pie) which often contained a gold sovereign.

However, the tradition can leave a bitter taste in the mouth in Spain, where the feast of the three kings is still bigger than Christmas.

If you are unlucky enough to get the feve there you are supposed to pay for the cake, while the king or queen is the person who finds the accompanying trinket.

In Ireland the Epiphany was known as ‘Women’s Christmas’ and is remembered more for its gastronomic horrors rather its treats, with men left at home to cook while women went to the pub.

Despite the fancy result of a galette recipe, it is easier to make then you think with a preparation time of only 15 minutes. Below you can find some popular Frech galette recipes. A guide to food in Lyon, the ‘Gastronomic Capital of the World’