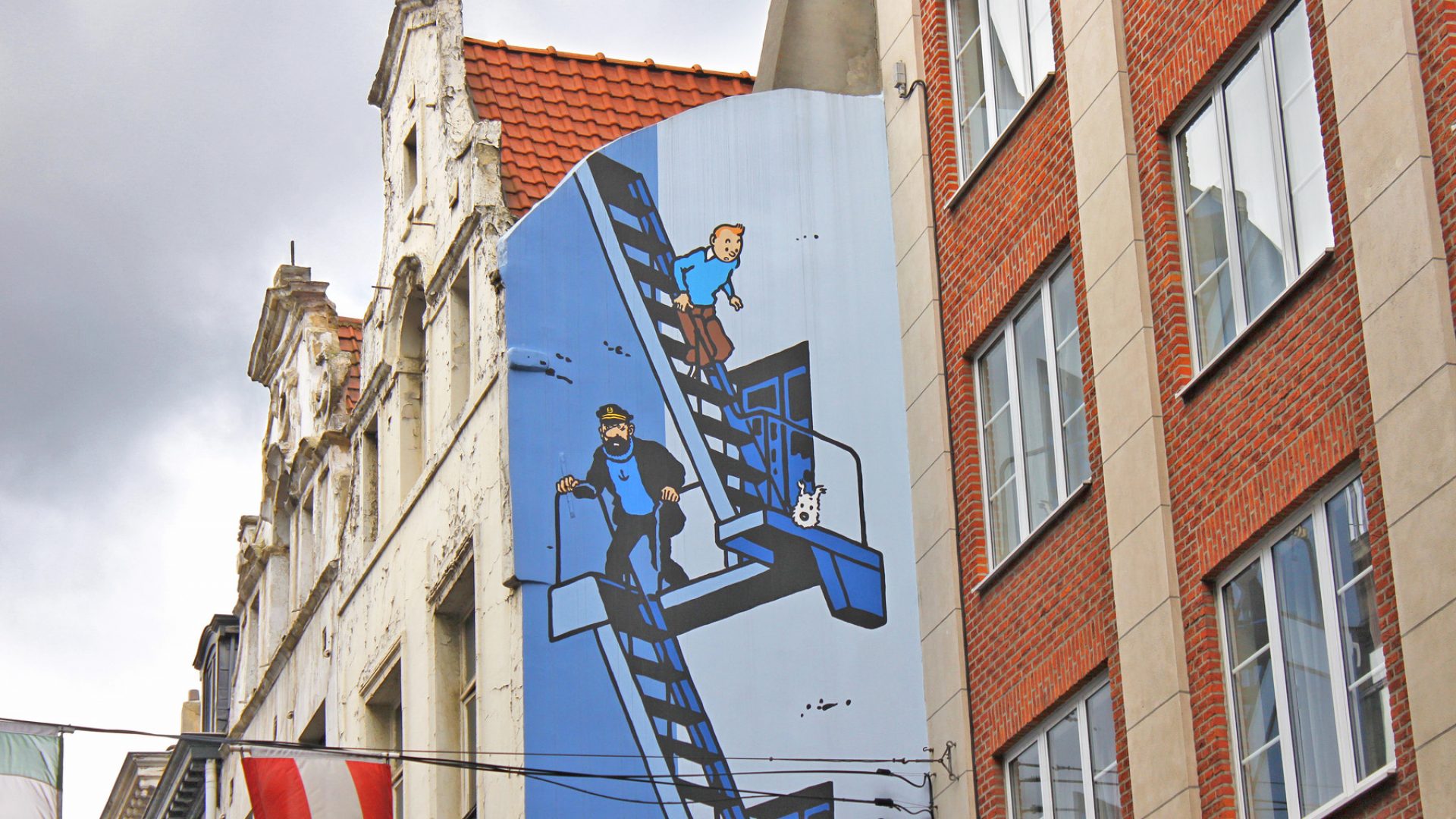 We track down the best murals on the Brussel Comic Book Route which stars some of the most famous characters from popular Belgian comics.

Brussels has proclaimed itself the comic book capital of the world – and rightly so. The city boasts more comic book stores than any other in the world. Not only that, but it is also home to some of the world’s most famous characters from Belgian comics; including Tintin, Spirou, and The Smurfs. However, these loveable figures don’t merely exist in the city’s comic book stores and Belgian Comic Strip Center. You can also find them on several walls scattered throughout the city along the Brussels Comic Book Route.

There are over 50 murals to discover on buildings around the city center and surrounding neighborhoods of Laeken and Auderghem. These colorful scenes appear in popular Belgian comics dating back to the 1940s. Visitors from all over the world come to marvel at them and spot the iconic characters as well as lesser-known figures. And if you fancy meeting Tintin and the gang yourself, here are some of the best murals and where to find them.

Want to explore all the exciting things Brussels has to offer but on a tight budget? Don't worry, Groupon is here to save the day! There are hundreds of incredible deals and discounts to be found on the website, including reduced prices on tickets to popular museums, attractions, and much more in Belgium's capital and beyond. So go ahead and treat yourself!

Created in 1957 by the Belgian cartoonist André Franquin, Gaston Lagaffe (whose surname means ‘the blunder’) is one of the most loveable characters of the comic book world. The lazy, accident-prone office junior first appeared in the famous Belgian magazine Spirou. He proved to be so popular that he was given his own mural in honor of his 50th birthday. Here, you can see him leaning out of the window and happily playing with his yo-yo; much to the dismay of poor Monsieur De Mesmaecker who is getting hit on the head by the toy down below. Classic Gaston!

The sky’s the limit in this charming mural which depicts Flemish comic book character Nero feeding the birds; accompanied by several other characters also created by Flemish cartoonist, Marc Sleen. Among these are Jan Spier, Mr. and Mrs. Pipe, and Nero’s son Halyard. The hero of The Adventures of Nero was created in 1946 and appeared in Catholic-Flemish newspapers for more than 50 years. He is now one of the most recognizable comic book characters in Belgium and one of the Big Three of Flemish comics. Interestingly, Marc Sleen holds the world record for the number of issues in a comic book series drawn singlehandedly by the same author. He drew every scene without any assistance from other artists.

Find it at Place Saint-Géry 20

The Adventures of Tintin is one of the most popular European comics of the 20th century. It has succeeded in capturing the hearts of comic book fans the world over. The hero of Georges Remi’s famous series and his faithful companion Snowy have solved many mysteries over the years; with the help of Tintin’s friend, Captain Haddock. The trio can be seen in this mural taken from one of Remi’s famous albums, The Calculus Affair; published in 1956. Unsurprisingly, the mural receives more visitors today than ever before. This is largely due to the release of the 2011 animated movie, The Adventures of Tintin: The Secret of the Unicorn; directed by Steven Spielberg.

Lucky Luke, the wandering cowboy, is faster than his own shadow; he’s already aiming at the bank robbers while his shadow continues to paint. Belgian cartoonist Maurice de Bevere, also known as Morris, created the heroic character in 1946. The satirical series centers on a stylized and mythicized Old West and sees Lucky Luke lay down the law. Throughout the series, he tackles various villains including the Dalton brothers who can be seen here raiding the local bank. The mural also features other characters including Jolly Jumper, Lucky Luke’s clever horse, and Rantanplan the dog.

One of the biggest murals in Brussels stars the famous Asterix and Obelix doing what they love most – charging at the Romans. Sprawled across the side of a school building in the Anneessens district, the scene is one of the most visited on the Brussels Comic Book Route. And it’s not hard to understand why. Originally written by René Goscinny and illustrated by Albert Uderzo, the 1959 French comic book series The Adventures of Asterix has been translated into 110 languages. Furthermore, more than 300 million albums have been sold worldwide. People can’t seem to get enough of the clever warrior Asterix and his heroic exploits.

The hero of the Belgian comics of the same name, Broussaille was first created by Frank Pé for Spirou in 1978. However, the red-headed dreamer eventually got his own series which centers on the beauty of nature, animals, and other cultures. Painted in 1991 by Frank Pé, Broussaille is the oldest comic wall in Brussels. It shows the protagonist and his friend Catherine walking arm in arm. This mural is located in Brussels’ gay nightlife district and caused some controversy within the LBGT+ community when it was repainted in 1999. Many people had expressed confusion over whether the couple was a man and woman or two men. As a result, Catherine was given a more feminine hairstyle and a larger bust!

Find it at Rue Marché-au-Charbon 41

Covering a space of 100 square meters, Blake and Mortimer is the second mural in Brussels to feature protagonists Philip Mortimer, a British scientist, and Captain Francis Blake of MI-5. The first, which was painted on a house in Rue du Rempart, was demolished along with the building. Nowadays, the heroic duo can be seen on the impressive mural on Rue du Houblon; which pays homage to the now-deceased author, Edgar P. Jacobs. Blake and Mortimer was Europe’s first sci-fi comic book series and was first published in 1946 in the Belgian comic Tintin. This image appears on the cover of The Yellow M issue from the 1950s.

Find it at Rue du Houblon 24

Created by French comic artist Tibet, Ric Hochet was originally published in 1955 in Tintin. The Franco-Belgian comic book series follows the adventures of the energetic journalist Ric Hochet, who drives around in his Porsche and investigates crimes. In this mural, you can see him at the window of the inspector’s daughter. Whether he is climbing in or climbing out is unclear. But then, the popular comic often ended with cliffhanger images such as this. The ‘real’ features of the wall seem to fit perfectly with the scene.

Victor Sackville stars a detective and spy in the service of His Majesty during WWI. The dashing Victor is the perfect English gentleman and was created by Belgian cartoonist Francis Carin in 1985. He was famous for globe-trotting his way around Europe’s hotspots; completing secret missions along the way. In 1992, he was given his own comic strip wall in Brussels at Rue Marché-au-Charbon 60. Here you can see him exploring the city with a female companion. It almost appears as though the two are debating whether to pop into the brasserie down below.

Find it at Rue Marché-au-Charbon 60

Set in a parallel dream world, Olivier Rameau is a series of Belgian comics that first appeared in the Tintin Journal in 1968. Created by Belgian cartoonist Dany Henrotin, the series follows the exciting life of legal clerk Olivier Rameau; who is called to the fantasy land of Rêverose along with his colleague Maître Pertinent. This mural depicts the whimsical world and features the hero himself with his love interest Colombe Tiredaile; who he eventually marries. You can also see an impressive display of fireworks in the scene. After all, the artwork appears on the wall of a fireworks store that commissioned it.

Find it at Rue du Chêne 9 Best festivals in Belgium 2023: bears, bathtubs, and beyond 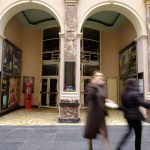 Cinemas and arthouse films in Brussels 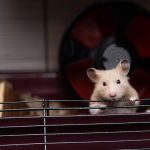