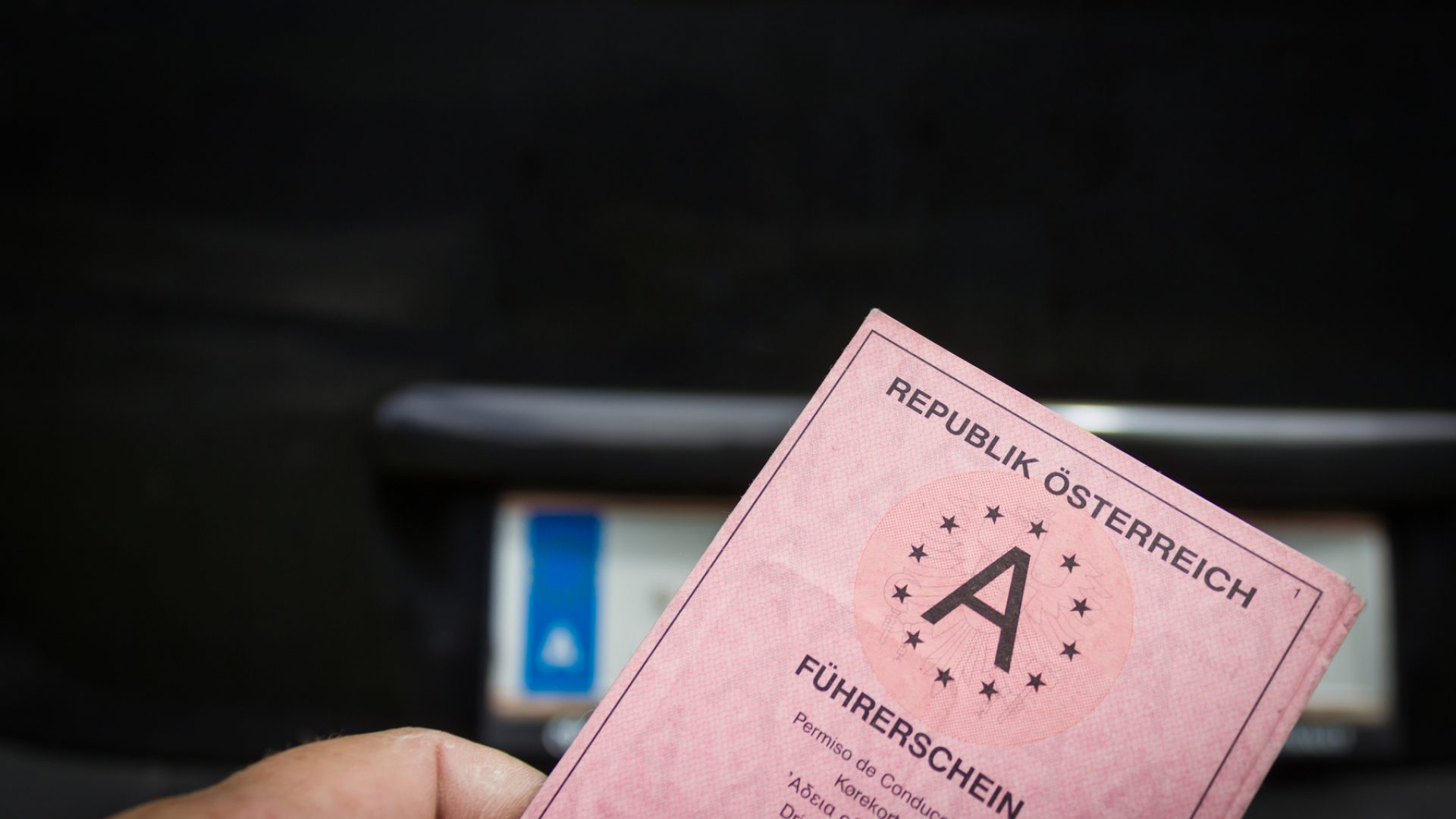 Getting an Austrian driving license

If you are looking to hit the road when you move to Austria, here is everything you need to know about getting your Austrian driving license.

Fortunately for expats moving to Austria, the process of exchanging your foreign driving license is fairly easy. That said, in some cases, you may need to go through the full local process of getting a license. The advantage of this is that you will easily be able to drive in Austria instead of having to rely on public transport – as good as that is in the country.

To help you out, this handy guide outlines everything you need to know about Austrian driving licenses, including the following:

Expats with a foreign driving license can use this for up to six months in Austria. However, after this, you will need to exchange it for an Austrian driving license. Licenses from certain countries can simply be converted to an Austrian one, but in other cases, you may need to sit a local driving test. Therefore, you should check which category your license falls into and ensure that you are prepared to get an Austrian license within six months of your arrival.

Additionally, anyone with a non-EU license must also have an international driving permit and a German translation provided by a translation service such as lingoking. Anyone wanting an Austrian driving license before the age of 18 needs to get an L17 license. This gives them early permission to drive and undergo L17 training. With this, you can begin driving from the age of 15 years and six months. However, you can only get a license at 17. Additionally, you have to pass a series of theory and practical tests.

Getting a driver’s license in Austria

In Austria, different authorities are responsible for issuing driving licenses. For example, in Vienna, the Motor Vehicle Department (Verkehrsamt) will issue your license. However, in other cities, the local Federal Police Headquarters (Landespolizeidirektion) or distractive administrative authority (Bezirkshauptmannschaft) is responsible for licenses.

You can begin taking driving lessons at the age of 15 years and six months if you get a B17 license. Once you have racked up a certain number of hours on the road, you will also have to take a series of tests. First, you have to present a certificate of good health from your doctor. Then, you have to undergo driving theory training with your driving school and pass a computer-based theory test. After all this, you then need to sit several practical tests. Generally, it takes several months to go through all the tests to gain an Austrian driving license.

To get an Austrian driving license, you have to pass both theory tests and practical tests. Your driving school will handle these.

Before you take the driving theory test in Austria, you have to complete 32 hours of training. However, you can choose how you want to prepare for this. For example, most people do two hours a week twice a week for eight weeks. But you can also choose to do four hours four times a week for two weeks (the intensive course) or four hours everyday for eight days (the express course). To assist with your preparations, you can also buy a set of books and CDs for €40 from the driving school.

While preparing for the theory course, or after it, you must also take a first-aid course that costs €55. This is a six-hour program where you will learn crucial first-aid methods like CPR. After this, you must pass all your driving exams and get your license within 18 months. Otherwise, you have to repeat the course.

The exam is a multiple-choice test and is done on computers. It covers two modules with 20 questions in each module. Since it is in German, you can have a translator if you need one. You will have 30 minutes to answer all the questions. And, you must get at least 80% to pass the test. The first theory test is free; after this, you have to pay for it.

In Austria, practical exams are held in the morning. You will also need to have your passport with you. The exam has three parts. First up is a vehicle check, where you demonstrate your ability to do a car safety check, including wheels, brakes, and lighting. Second, you will begin driving on a quiet street where you have to perform a parallel park and back into a parking spot.

Thirdly, you will drive in a city center or on the Autobahn. Finally, you will have the chance to discuss the exam with the examiner and justify any mistakes you may have made. In total, the practical exam takes about 45 minutes. If you pass, you will get a temporary driving license immediately and a proper license comes in the mail a few weeks later.

Read our guide to European traffic laws and road rules

Before you take the practical driving tests for your Austrian driving license, you have to have a certain number of training hours. The exact number of hours you need depends on what category of license you are getting, though. For example, A-category licenses need 12 hours, whereas B-category licenses require 13.

At least the first six hours of your training must be with a registered instructor. After all of this, you can begin honing your skills by driving with a licensed driver. During this pre-exam prep, you will learn everything from traffic assessment and lane changes to negotiating intersections, economical driving, and how to navigate the Autobahns. In Austria, driving lessons normally cost around €65 each.

Below is a list of popular driving schools throughout Austria that offer a variety of driving courses with varying costs:

Driving with a foreign driver’s license in Austria

If you have a foreign driving license, you can use this for up to six months in Austria. That said, it should be accompanied by an international driving permit. And, if the license is not in German, you should also have an official translation. After three months, you will have to get an Austrian driving license.

When you are ready to get an Austrian driving license, you can simply exchange your foreign one. Generally, this is a simple process. You will need to take some documents to the appropriate licensing office, such as your passport, foreign license, and photo. You will also need to show a valid medical report of good health and your Austrian residence registration form (Bestätigung der Meldung). The conversion to an Austrian driving license costs €60.50, but if you need it immediately, you have to pay an additional €18.94. In some cases, you may also need to take a driving test.

However, the above generally only applies if you have a foreign license from a non-EU or non-EEA country. If your license is from an EU or EEA country, you are allowed to drive in Austria with this for up to five years. That said, you will still need to register with the local authorities as they will need to perform a background check.

Renewing a driver’s license in Austria

An Austrian driving license is valid for 15 years. Therefore, you won’t need to renew it that frequently. Generally, you will be notified about three months before your license is due for renewal. Then, you can quickly and easily renew your license in person or online. You might just need to submit new details and photos. However, if your license has expired, you will probably need to retake all the tests to get a new license.

Looking to buy or rent a car? Visit our directory

In Austria, there is no upper age limit for renewing a license. However, you may need to present a certificate of good health in order to maintain your license.

If you lose your Austrian driving license, you should report this to the police as soon as you can. In fact, you should do this at the most within a week of this happening. You will then receive a document stating that you have lost your license, which you can use as a temporary license. You can drive in Austria for up to four weeks with this. However, you should also carry an official photo ID with you, too.

If you lose your Austrian license outside of the country, however, you have to wait until you return to get a replacement. It is useful to have a list of Austria’s emergency numbers at hand in case you do need to contact the police about your lost license.

Driver’s licenses in Austria for other vehicles

There are, in fact, several categories of licenses in Austria. Of course, there is the regular B license and L17 for young drivers. However, there is also the L license for private lessons with a licensed driver. While B licenses can be used to ride motorbikes under 125cc, anything else requires an A license. In addition, there are license classes from C through to F for truck, bus, and tractor licenses. There is also a specific Austrian driving license for taxis. Getting car insurance in Austria