The colourful ‘Tazovy Downhill’ annual bowl race is an event organised by Muscovites to raise their dreary winter spirits. The 2011 contest will take place on February 26. Frederick Bernas writes.

An expectant group of thickly-coated people is gathering in the park at Orehovo, 15 minutes’ walk from its namesake metro station in south Moscow.

Winter sports are popular here. Finding entertainment in freezing conditions is no problem for a nation accustomed to three months of sub-zero temperatures. Obvious options like skiing, snowboarding and ice-skating are essential, but a little creativity can lead to endless possibilities.

Established in 2005, the Downhill competition is one such novel concept: rather than using skis or boards, people race each other in bowls. As the appointed time draws nearer, a plethora of bizarre vehicles appear on the hilltop.

Some contestants have procured typical household basins, decorated with zany motifs. One team boasts a four-person frigate vessel anchored on a raft made from tree branches. Baking trays, customised snowboards and even a toilet seat complete the array.

Organisers call out the last chance for registration. People line up along the sides of the slope, ready for racing to commence. There’s an excited buzz in the atmosphere. Cameras everywhere. Initial heats will cut the 60-strong field down to three finalists.

Cries of davai! davai! fill the air as the contest begins, with three luminous yellow-jacketed participants jostling for position. A few minutes later, we have the first breakage — a trail of pink plastic fragments leaves one unfortunate competitor sans bowl after less than three seconds of descent. Could that be a record?

Booze for the best costume

More comical moments are to follow; in addition to the speed challenge, an alcoholic prize is on offer for best costume. As with the vehicles, people have put time and thought into their ideas: we have two lads in orange jumpsuits wearing old Soviet gas masks, one guy in a dubiously acquired police uniform, various snow angels and a fair amount of randomly unidentifiable creations.

Back to the race. Our eventual winner, posting an impressive time of 8.19 seconds, is a 30-something opera singer. Known only as Repka (radish), he actually enjoyed a double victory, also capturing the best costume crown. It was a fine effort — an inflated yellow foam bodysuit that made him look twice his weight, topped off by a green fabric headpiece to represent the vegetable’s stalk.

The design was inspired by an old Russian fairytale: a family is growing radishes, one of which becomes so big that it’s impossible to pull from the ground. Only when a whole group of people and animals join the effort do they manage to dig it up, with a tiny mouse making the decisive contribution. The moral of the story: every little helps when people work together.

This mysterious yellow fellow turned out to be something of an extreme sports enthusiast. “I’ve had this costume since a bike competition when 1500 people dressed up and cycled 25 kilometres all over Moscow,” he explains. “We went right past the Kremlin – it was great, so cool. I’ve also been to the Tian Shian mountains in Kyrghyzia and to Albrus, the highest mountain in Europe, where I broke my ankle.”

“For this race I decided I just wanted to show off my costume, mainly participate in that competition — not so much the downhill thing, maybe fifth or sixth place. I didn’t expect to be the winner. That was not my aim; it’s even a little bit inconvenient for me, I am feeling slightly uncomfortable about it.”

After a flurry of attention at the awards ceremony, our champion looks anything but uncomfortable. Sitting jovially on an upturned bowl, he offers cognac and snacks to one and all while his little black dog yelps excitedly.

Dmitry Maltsev, a lawyer who came in third place due to a vehicular malfunction, is not devastated about the loss. “I’m alive — that’s the main thing,” he says, glancing down at his “modernised” snowboard and its adjoining shattered bowl.

“The most important thing about today was that it’s not serious. You’re participating, you’re trying to do your best, but it’s not serious – no one is angry, and I’m fine about third place. It feels like first place!” In fact, he did secure a victory of sorts, recording the competition’s fastest time of 7.65 seconds in his preliminary heat.

Besides the obvious comedy factor, people have revealing views about the Downhill event’s popularity. Elena Sudakova, one of the organisers and a professional skater, thinks it is partially due to the stresses of the season.

A chance to de-stress

“We want to have fun and cheer people up. The Russian winter can be boring and depressing with long days and bad weather, so the end of the winter is good,” she says. With the brutal onslaught of economic crisis afflicting many Russians, this winter gone by will have seemed an especially tiring one.

The larger-than-life Repka has another insight: “Many people work a lot in offices. It’s very stressful, very routine and they are like robots. But now we are here to let out our emotions: we’re not thinking about money, we relax, we drink champagne from the bowls, we drink cognac, we communicate with each other; it’s great to see foreigners here too. That’s why I go to the mountains, ride bikes and do all the things like that — to relax.”

As a spectacle, the Downhill contest draws comparisons with that great British traditional quirk, the Gloucester cheese-rolling. Unsurprisingly, Repka knows about it: “Maybe I will go there for my next project one day,” he states thoughtfully.

“But for now I am happy here with all these crazy Russians riding on bowls.”

Frederick Bernas is a multimedia journalist who was based in Moscow during 2008-2010. He has contributed to outlets such as The Guardian, Monocle, France 24 and supplements of the Daily Telegraph and Washington Post. You can follow his blog “Dispatches” at frederickbernas.blogspot.com. 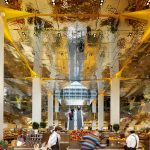 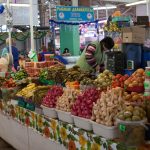 Rinok, a swirl of the tastebud life 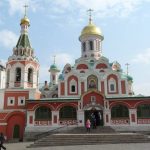