We check out some of the quirkiest rules for drinking in Europe to help you hit the bar like a true local, wherever you are.

Fewer things are more enjoyable than clinking your glasses together with friends and indulging in a cheeky tipple or two. But to drink like a true local, it always helps to learn the rules and customs in the country you live in. So raise your glasses as we explore some of the quirkiest customs for drinking in Europe that will help you blend in the next time you hit the bar.

Just like their food, art, and fashion, the French are passionate about their drinks and follow some very strict rules when it comes to toasting. For one, when raising your glass with someone in France, you must always look them directly in the eyes. Furthermore, you should never add ice to your glass of wine or cross your glass with someone else’s. And don’t even think about putting your glass down without taking a sip after someone says a toast – or you will suffer from seven years of bad sex!

In Italy, drinking is all about savoring the flavor and enjoying every sip, so think twice before necking that chilled pint. That said, you might be let off if you stumble upon an intriguing hole in the wall; a small, no-frills bar where people can grab a quick pint in the street. If you want to drink like a true local, however, you should only sip on water and wine with your meal. You could even take it one step further and enjoy an aperitivo (to stimulate your appetite prior to a meal) and a digestivo (to help you digest after a meal).

The Germans aren’t exactly known for having a playful sense of humor, but if you’re heading to a wedding there, you might be in for a surprise. One popular wedding tradition is to kidnap the bride after the ceremony – yes, you read that right. The groomsmen take the bride to a bar where she must wait for her hubby to track her down. And once the poor man does eventually find his bride, he must then foot the entire bill for his groomsmen. What an excellent way to get free drinks.

The Germans aren’t the only tricksters when it comes to drinking in Europe on that all-important wedding day. Instead of stealing the bride, however, the wedding guests will try to steal her shoes. The bridal party is then expected to perform a task to retrieve her captive footwear. This often involves someone drinking vodka from the shoe. Savvy bridesmaids might sneak a glass into the shoe and drink from that instead – after all, why wreck a perfectly good pair of shoes?

You will need a strong stomach if you plan on drinking with the Dutch. One of their favorite drinking games is called Kopstootje, which literally translates to little headbutt. This involves taking a shot of chilled jenever (Dutch gin) from a small tulip glass, without using your hands. The brave drinker must bend over from the waist, take a big slurp, then chase it down with beer. This may just be a ploy to get you intoxicated very quickly. Either way, if you’re still standing after this impressive stunt, then you definitely deserve a plate of tasty bitterballen!

The Spanish have many quirky superstitions. They believe that leaving your hat on the bed, wearing the color yellow, bringing an old broom into a new home, and Tuesday (named after Mars, the Roman god of war), all bring bad luck. Drinking in this sunny country carries its own risks too. The bad sex curse, for example, which is associated with not looking the other person in the eye, also applies if you have the audacity to toast with water. It might be wise, therefore, to order one of the popular tipples below.

Poisons and venoms have played an important role in Greek history, mythology, and even the customs of drinking in Europe. In ancient Greece, for example, hemlock (the highly toxic herbaceous plant) was used to poison condemned prisoners. It was also used to execute the classical Greek philosopher, Socrates, who was forced to drink it. Despite the passing of more than two thousand years, it seems the Greeks haven’t quite let that go. Today, the tradition of clinking glasses and saying ‘cheers’ is said to have originated during those distrustful days. It was thought that clinking your glasses together would allow for some of your drink to flow into the other person’s glass. Therefore, if it was poisoned, they would fall victim too – so beware of the poisoned chalice!

The Danish have a reputation for being friendly and approachable. That said, you might not want to get on the wrong side of them. After all, it is said that Vikings would often drink wine from bowls made of the skulls of their sleighed enemies. This might explain why the Danish word for ‘cheers’ is skål, also meaning ‘bowl.’ While we will never know the truth behind this bold claim, it might still be wise to maintain eye contact with your companion when you toast with them – just to be safe. 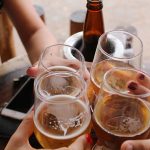 Bottoms up: how to say cheers in 50 different languages

The difference between traditional and online banking