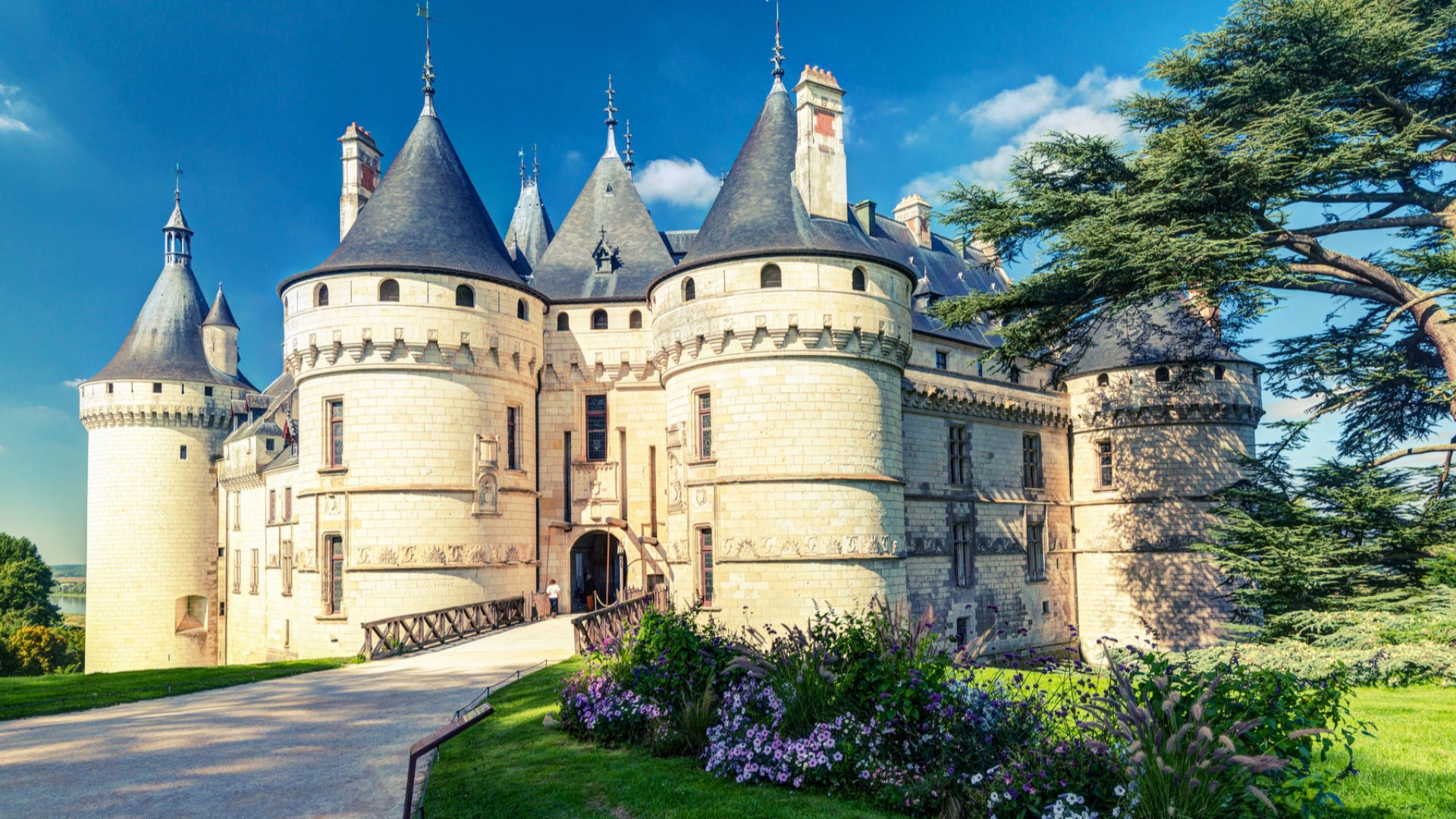 Home Lifestyle Things to Do The most beautiful French castles in the Loire Valley
Last update on May 13, 2022 Looking for a romantic getaway in the Loire Valley? Then maybe a trip to one of these enchanting French castles will inspire you.

Often referred to as the garden of France, the Loire Valley was once the stomping ground of French royalty and nobility. Today, however, it is one of the most popular destinations in France for all to enjoy. This is largely owing to the 300 elaborate châteaux that are dotted throughout the region. Unsurprisingly, many of these stunning French castles are UNESCO World Heritage Sites, with more than 100 opening their gates to the public. However, while all of them are beautifully maintained and come with their own unique history, some are more famous than others.

So, to help narrow down your list, here are our favorites French castles to visit in the beautiful Loire Valley.

Want to explore all the exciting things France has to offer but on a tight budget? Don't worry, Groupon is here to save the day! There are hundreds of incredible deals and discounts to be found on the website, including reduced prices on hotels rooms, tickets to popular tourist attractions, and more throughout the country. So go ahead and treat yourself!

With its stunning French Renaissance architecture and surrounding deer-filled park, Château of Chambord is considered to be one of the most beautiful castles in the Loire Valley. In fact, Leonardo da Vinci is believed to have been partly involved in – or at least influenced – its original design. You can see this, for instance, in the Greek cross-shaped center-plan design and famous double-helix spiral staircase. Many French kings have called the beautiful castle home since it was constructed in 1519. The King of Poland, Stanisław Leszczyński, whose daughter married King Louis XV, also lived there in the 18th century.

After passing through many hands, the Duke of Parma inherited the castle in the late 19th century. Then, in 1932, the French government bought it and restored its original appearance. Château de Chambord has remained a UNESCO World Heritage Site since 1981 and is open to the public for guided tours. Visitors can enter the royal lodgings and access mezzanines and lofts that are off-limits to the general public via hidden flights of stairs.

Discover the 10 most beautiful places to visit in France

As well as featuring 440 rooms, 335 fireplaces, and 12 staircases, the castle is also home to the largest walled park in Europe. This covers a whopping 13,500 acres. Needless to say, this is one of the most impressive French castles you will discover in the Loire Valley.

With its high corner towers, stone arched bridge, and wide moat, Château de Sully-sur-Loire looks like something from the pages of a fairytale. Its location, at a strategic crossing of the Loire river, makes it all the more enchanting. The beautiful medieval fortress was built in 1395 for Guy de La Trémoïlle, Lord of Sully, by the king’s architect, Raymond du Temple. Since then, it has been the home of Maximilien de Béthune (minister to King Henry IV of France) and the later dukes of Sully. It has also played host to famous historical figures including Joan of Arc, Louis XIV, and Voltaire.

Although the château suffered a terrible fire in 1918, and damage during WWII, it has been rebuilt and restored to its former glory over time. It was also classified as a Historical Monument in 1928. The castle is open to the public who can explore its rich collection of tapestries, wall hangings, and sculptures. It also hosts a classical music festival every year as part of the Music Festival De Sully & Du Loiret.

Located near the small village of Chenonceaux in the Indre-et-Loire department, Château de Chenonceau is another must-see French castle. It was built in 1513 by King Charles VII who then gave it to King Henry II; however, he later passed it to his mistress Diane de Poitiers. Once the king died, his wife, Catherine de Médicis, forced the mistress to take ownership of the castle. It is now famous for having a woman’s touch. You can see this in several key features including a beautiful flower garden, an English-style park, and an Italian maze containing 2,000 yew trees.

The castle is also home to an extraordinary collection of furniture, tapestries, and paintings by some of the greatest European painters including Rubens, Clouet, and Van Dyck. These works of art strongly reflect the history of the château and the leading role that women played in it. Perhaps the most impressive feature of the castle, however, is the River Cher which surrounds it. This offers a perfect reflection on a clear day.

Originally built as a fortified tower in 1532, Château de Villandry is most famous today for its spectacular Renaissance gardens. In fact, these are the most celebrated in the Loire Valley. Covering an area of nine hectares, these beautiful grounds include a Kitchen Garden, Water Garden, and Ornamental Garden. The latter is also home to a famous Garden of Love, which features romantic symbolism from the Renaissance era. Needless to say, this is a must-visit for romantic souls with a love of nature.

The grand interiors of the château also reflect this elegant Renaissance flair. Highlights include the dining room which features an ornate fountain and marbled floor, and an art gallery filled with Spanish paintings from the Golden Age. The château also features an intricate Louis XV staircase with the initials of Michel-Ange de Castellane – who acquired the castle in 1754 – intertwined into the banisters. This, along with the dining room, was classed as a historical monument in 1934.

Another French castle that is famous for its beautiful garden is the Gothic-Renaissance style Château de Chaumont-sur-Loire. In fact, every year since 1992, the beautiful fortress plays host to the International Garden Festival of Chaumont. This sees landscape artists from all over the world create enchanting contemporary gardens that tie into a certain theme. Visitors can wander among these and immerse themselves in their unique atmosphere; all the while enjoying the stunning backdrop of the château.

The castle itself, however, has a less tranquil history. It was originally built around the year 1000 to keep watch over the border between the counties of Blois and Anjou. But in 1465, King Louis XI burned it to the ground as a punishment to its owner who took part in an anti-royalist movement. Just a few years later, however, the king gave his permission to build it. Although the castle was originally designed with gothic elements, it was later transformed into the Renaissance style. You can see this in its ornate sculpted decor and rich furniture.

If you grew up loving fairy tales, then a trip to the enchanting Château de Usse is definitely in order. After all, it is said that this whimsical French castle was the inspiration for Charles Perrault’s classic fairy tale Sleeping Beauty. Many also believe it inspired some of Walt Disney’s castles. And its romantic setting at the edge of the Chinon forest certainly makes it look like something from a storybook. In fact, the castle even features a turret in which visitors can enjoy a delightful display of the famous tale; starring Prince Charming and Princess Aurora, of course. Elsewhere in the château, furnished rooms filled with mannequins dressed in period costumes bring its rich history to life.

The Château of Ussé was built in stages between the 15th and 17th centuries and incorporates both Gothic and Renaissance elements. Among its mysterious features are a 1,000-year-old underground passage and wine cellars dating back to the 14th century. Although it became a Historical Monument in 1942, the château remains privately owned. It is also the only one in the Loire valley to house the same family for more than two centuries.

Another stunning French castle with an interesting connection to literature is Château de Cheverny. This 17th-century beauty was the inspiration for Marlinspike Hall in Hergé’s famous Belgian comic book series Tintin. In fact, the estate and The Hergé Foundation even built a permanent exhibition on-site called The Secrets of Marlinspike Hall. This isn’t the only thing that makes Cheverny special, however. Unlike so many French castles in the Loire Valley, it embodies the classic Louis XIII style. It is also perfectly symmetrical.

The château was also built using local white stone that actually gets stronger and more robust with time. And its beautiful pristine exterior certainly sets it apart. The castle also features a labyrinth and gardens filled with wisteria and tulips. It hosts several events each year, including a Venetian weekend which sees the castle grounds transform into a popular carnival. The château is also famous for its hunting and is home to more than 100 dogs which visitors can visit. In fact, one of Cheverny’s main attractions is watching the feeding of the hunting dogs in the afternoon.

Many royal families and historical figures, including Leonardo da Vinci, have walked the floors of the luxurious Château d’Amboise since the French monarchy took ownership of it in the 15th century. In fact, his tomb lies in a church on the castle grounds. Perched high on a hill overlooking the Loire Valley and the town of Amboise, the UNESCO-listed château boasts fantastic views; particularly from its balconies. Of course, passers-by can also admire its majestic reflection in the Loire River.

Château d’Amboise combines both Gothic and Renaissance styles and became a French Historical Monument in 1840. Today, it remains one of the most visited French castles in the Loire Valley with its beautiful terraced gardens and orangery being particular highlights. The latter also features a 3D recreation area that shows the castle’s major transformations which began under Charles VIII’s reign. 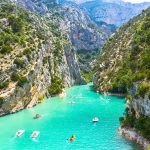 The 10 most beautiful places to visit in France