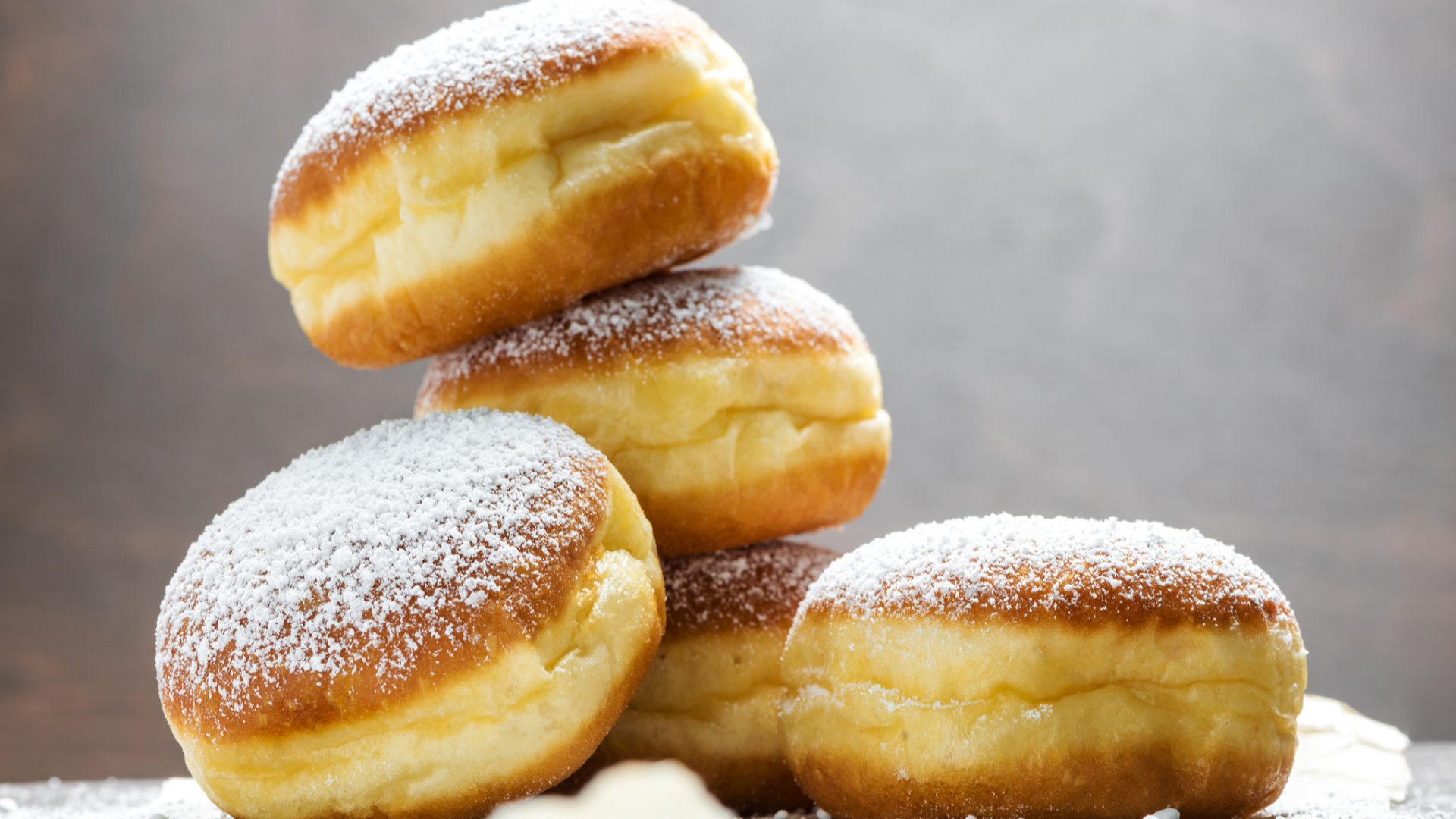 From strudels and tarts to doughnuts and chocolate-covered pears, we delve into the most tantalizing Swiss desserts and treats you need to try.

Switzerland is renowned for producing some of the best chocolate in the world. In fact, the country exported a whopping 126,000 tonnes of it in 2020 alone. Meanwhile, the average Swiss resident munched 9.9kg of the stuff that same year. But if you think that chocolate is the only specialty that the country has to offer, then think again, because Switzerland is home to some of the most devilishly delicious desserts you can imagine. Indeed, expats with a sweet tooth will have the time of their lives exploring the bountiful selection of tasty delights on offer. So prepare to drool as we delve into the most delectable offerings the chocolate-loving nation has to offer.

While the French have their quiche, the Swiss have their Wähe (tart). The beauty of this delicious creation, however, is that it can be enjoyed in either sweet or savory form. While there are many varieties, the most popular are typically made using seasonal fruits such as apples, apricots, cherries, and plums (Zwetgschenwähe). Savory recipes, on the other hand, tend to include ingredients like cheese, onions, or spinach, mixed into an egg and cream custard filling. Wähe can be enjoyed any time of the day; be it for breakfast, as a coffee-time treat, or an afternoon snack. Whenever you eat it, though, make sure to pair it with a steaming hot cup of tea or coffee for extra fun.

Another classic Swiss dessert with a juicy history is Zuger Kirschtorte (Zug cherry cake) which, as the name suggests, originated in Zug. This delicious creation combines layers of almonds and hazelnut meringue with sponge cake and buttercream. The sponge is soaked with a mixture of sugar syrup and Kirschwasser (cherry brandy) to give it extra flavor, while food coloring is usually added to the buttercream filling to give it a pretty pink hue. And for the finishing touch, the top is gently dusted with icing sugar. Zuger Kirschtorte was invented in 1921 by a pastry chef called Heinrich Höhn and went on to win gold medals in pastry exhibitions in Lucerne and London.

And now, one hundred years later, it still remains a national treasure and even inspired 10 bakers from Zug to create the largest Zuger Kirschtorte in the world, which weighed 240 kilograms and measured 4 meters in diameter!

It’s no secret that the Swiss are nuts about this classic Swiss dessert. In fact, the sweet, caramelized nut-filled pastry is so popular that it accounts for 20 to 40% of the total sales for many bakers in Switzerland. It is also one of the country’s largest export items. Unsurprisingly, it is the star of the show in small independent bakeries throughout the canton of Graubünden, in eastern Switzerland, where it originated. The shortcrust pastry is made using flour, sugar, eggs, butter, and a pinch of salt. The filling, meanwhile, consists of caramelized sugar, heavy cream or milk, and chopped walnuts. There are several recipe variations, some of which include a dollop of honey. However you choose to make this tasty little dessert, though, it always goes down swimmingly with a hot cup of tea or coffee.

Like most European countries, Switzerland has its own selection of sweet treats that people like to enjoy during the festive season. The most popular of these are Tirggel which are traditional Swiss Christmas cookies that come from Zurich. Made with flour, sugar, and honey, these thin, rock-hard biscuits are easily recognizable by the images on the top which depict Biblical scenes and historical Zurich motifs. They are made by pressing the cookie dough into elaborately carved molds of various shapes and sizes.

To make them extra hard, they are then baked at an extremely high temperature of 400°C for only 90 seconds and left to cool. Because of their durability and elegant designs, these pretty little biscuits are often kept for months, or even years, as Christmas decorations. Of course, there are many other types of festive Swiss cookies too, including Zimtsterne, Chräbbeli, Mailänderli, and Brunsli which you will discover at the many Christmas markets in Switzerland.

Although the original recipe for this tasty little treat comes from Berlin, the Berliner is incredibly popular throughout Switzerland. It first appeared in 1715 as a traditional pastry for celebrating Carnival – or Karneval – which comes before the fasting of Lent. In Switzerland, however, they are typically enjoyed during Fasnacht in Switzerland’s German-speaking areas. There, they are known as Fastnachtsküchle, which translates to ‘Carnival cakes’. That said, they can be enjoyed at any time of the year and can be found in bakeries all throughout Switzerland.

Fastnachtsküchle are essentially deep-fried German doughnuts that are typically filled with apricot jam and sprinkled with powdered sugar. However, the type of filling actually depends on where you are. In the southwest and north of Germany, for instance, cherry, strawberry, or raspberry jam can be found in the center. In the east, however, this is usually plum jam. Meanwhile, rosehip jam is preferred in Swabia and Franconia, and apricot jam in Bavaria and Austria.

Sometimes, it’s the most simple recipes that turn out to be the best, and this is certainly the case with Schoggibirnen, which literally translates to ‘chocolate pears’. There are numerous Swiss dessert recipes that beautifully pair these two ingredients, including cakes, tarts, and crumbles. But if you’re looking for a quick and easy Swiss dessert to whip up in your own kitchen, then you can’t go wrong with steamed pears drizzled in a warm chocolate sauce. When making this indulgent dessert, the trick is to carefully melt the chocolate over low heat while stirring it to make sure it doesn’t boil. That, and of course, using the finest Swiss dark chocolate.

Originating from the Italian-speaking canton of Ticino, this unique Swiss dessert is made using stale bread; hence its Italian translation – ‘bread cake’. So, if you’re looking to use up your not-so-fresh loaf or Zopf, then this is a great way to spare any waste. While there are many recipe variations for this sweet cake, the basic ingredients include stale bread, milk, eggs, sugar, lemon zest, egg, and pine nuts. Of course, you can also add other ingredients such as cinnamon, nutmeg, and vanilla for extra flavor. You can also throw some almonds or raisins into the mix if you prefer. This delicious cake is often found at local festivals, bakeries, and rustic restaurants throughout Switzerland. And, like so many of the nation’s sweet treats, it can be enjoyed any time of the day; perhaps for breakfast or as an afternoon snack with tea or coffee.

Okay, so we know we said there is more to Swiss desserts than just chocolate. But a roundup of the most delicious ones wouldn’t be complete without mentioning it – after all, it is world-famous! While there are numerous Swiss chocolate brands whipping up all varieties and flavors, the most famous are undoubtedly Lindt, Toblerone, and Nestlé. And one of the most enjoyable things you can do in Switzerland is to visit one of the country’s many delicious chocolate factories.

Here, you can gain a glimpse into the intricate art of the world’s greatest chocolatiers. And if you’re lucky, even try making some yourself! However, just make sure you leave enough time to stock on all the goodies you can carry at the museum chocolate shops before you head home.

See how it’s made