Home Moving to the UK Where to Live The English countryside: life in an English village
Last update on April 23, 2020
Written by Peter Orange
Share

How to settle seamlessly into the rural English countryside, from the international family’s viewpoint.

England in the summer is like a large well-kept garden that stretches on forever. For centuries landowners and horticulturists have shaped the land and as a result every county in England has something peculiar in its landscape and local culture to discover.

The countryside of England today reflects the wealth of landowners and success of those who can afford to escape the trappings of city life. According to a recent survey conducted by Country Life magazine, some 80 percent of Britain’s population dream of living in the countryside, whilst only 20 percent actually live there.

English village communities are small and often eccentric. They are, however warm and usually welcoming, reflecting local charms of the ‘English character’. The local post office or shop is the communications hub of every village, while the village pub offers an opportunity for new arrivals to get to know local culture and its personalities. But the heart of many rural communities remains a — usually historic — village church around which many community activities–and squabbles–revolve, from village fêtes, parish council meetings to flower arranging.

Looking for an easy way to find your next home? Spotahome is an on-line property portal operating in the UK that takes the stress out of renting. With Spotahome's unique online platform, you can find, look around, and book your next rental property without leaving home. Making moving home easier with Spotahome.

Once a celebrated radio presenter in Shanghai, Maggie Zhang spoke to me about her experiences. She and her Scottish husband moved to a village near York in North Yorkshire shortly after their marriage.  Five years later and still in the same village, she reflects on how she and her expanded family, they now have two children, find village life.

“Village life is wonderful for the kids,” says Maggie. “There is a great sense of community here. Shanghai is all about money, money, money. Here it is more relaxed and you can’t tell who has money and who hasn’t.”

For Maggie, getting to know local people hasn’t been a problem. The post office has been the main place of contact and neighbours often greet her in the street. Through motherhood, attending post-natal classes and now as her children go to nursery she finds herself increasingly involved with the community, meeting new people and invited to children’s parties.

The residents of Maggie’s village are hardly multi-cultural, yet in her view seem easy going. Maggie hinted that even if local people are curious about her background, so far no one has said anything.

Children, however, are much more direct and like any mother her greatest worry is her children’s future and how they will get along at school.

Five months ago, Claudia, a lawyer, and her British husband moved from Puerto Rico to a new housing estate within a village in Derbyshire to bring up their daughter of two years.

Despite past experiences as an expatriate working in East Asia, the transition to England for Claudia has been made more difficult because of the isolation she feels through living in the country-side. “In a city it is easier to feel less like a foreigner than in rural areas.” she says, despite the advantage of a rural village being “cheaper”.

For internationals used to city life, living in an English country village presents its own challenges.  For instance, there aren’t so many facilities as in a city and transport links aren’t so well-developed. It can also be harder to find like-minded communities of internationals. For some expats it may be best to select a village near a major city to experience the best of both worlds. Country Life counsels people to take the advice of estate agents on choosing the right place to live and identify the “five Ps: a pub, public transport, parish church, primary school and post office.”

Top tips for surviving in an English village

Maggie and Claudia’s suggestions for making a success of life in the English village are:

*NB: Some of the most famous areas for outstanding countryside in England are Devon, Yorkshire, Northumberland, Cumbria, Cornwall, Norfolk, Dorset, Hampshire and Somerset to name just a few.  Devon was rated by Country Life as Britain’s best county. www.countrylife.co.uk 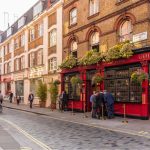