Swiss carnival is when the Swiss let loose with out-of-tune brass music and outlandish Fasnacht costumes. Find the best places to celebrate Fasnacht in Switzerland, including Basel, Bern, and Zurich.

The frenzied Swiss carnival season, also known as Fasnacht in Switzerland’s German-speaking areas, is when chaos and merriment reign, although the tradition has varying oral origins: as an old Germanic sacrificial practice, a time to let loose before the penitential period of Lent, a festival to drive away demons and a celebration marking the end of winter.

Switzerland’s carnival season traditionally begins on ‘Dirty Thursday’ — the Thursday before Lent — but several cities have been known to break away from tradition by celebrating as late as May; Basel Fasnacht, for example, is celebrated the week after Ash Wednesday (1 March in 2017).  Lent typically starts 40 days before Easter, so the dates change each year. In 2017, the height of Swiss carnival runs the week before Ash Wednesday (23–28 February) and the week after (3–6 March).

Here are some of the best and biggest places to dive into carnival in Switzerland in 2017.

Fasnacht Basel is the largest and most famous carnival in Switzerland. Breaking from tradition, Basel carnival is celebrated on the Monday following Ash Wednesday, occuring over the locally coined ‘three finest days’. Basel Fasnächtlers dress head to toe in themed costumes to completely hide their identities while members of ‘cliques’ — bands playing piccolos and basler drums — wear themed garbs to parade around Basel Fasnacht.

The colourful festival begins with Morgenstreich at 4am (on 6 March in 2017) during a predawn ritual where all the lights of Basel’s Old Town are turned off. The cliques then arrive with lanterns while playing tuneful melodies to usher participants into the town’s various bars and restaurants, which remain open for the full 72 hours of Basel Fasnacht.

The typical Swiss Guggenmusik bands make a comeback on Tuesday evening when they play in open-air spaces throughout the city such as Marktplatz, Barfüsserplatz and Claraplatz, and sometimes they even serenade onlookers. The main Basel Fasnacht parade occurs on Tuesday and is participated only by families and children. Basel also stages one of the best known lantern festivals in the world from Monday evening until Wednesday morning (8 March in 2107) when intricate lanterns are showcased at the Münsterplatz for locals and visitors alike.

Lucerne’s carnival (Fasnacht) begins with a big bang before dawn at 5am on Thursday (23 February in 2017) called Morgenwacht —  a uniform gun salute from dozens of brass bands. Guggenmusik, a joyful cacophony of songs played in a typical out-of-tune fashion, blare and break the quiet of the city as a throng of people wearing outlandish costumes filter out of their homes and parade up and down alleyways.

Big parades take place between Thursday and Monday, attracting tens of thousands of people. The crowning finish of Lucerne’s Fasnacht, however, is on Tuesday 28 February with the Monstercorso, an incredible procession of lights, lanterns and Guggenmusiken playing traditional carnival music.

Fasnacht Solothurn takes the carnival idea of turning everything upside down by transforming into Honolulu during the festival. An unnamed fellow once commented that Hawaii’s capital city is exactly on the other side of the globe, making it the literal opposite of Solothurn.

Like Lucerne, Fasnacht Solothurn festivities begin at 5am on Thursday (23 February in 2017) with a deafening boom from brass and percussion bands spreading discordant music down the streets. Escorted by torch bearers wearing white night caps and shirts, bands parade through the city until the afternoon when the Fools’ Guild proclaims the official start of carnival. Masked balls are set for the following evenings while huge parades partly depicting sociopolitical parodies are staged on Sunday and Tuesday afternoons. Fasnacht comes to an end on the evening of Ash Wednesday (1 March in 2017) when Solothurn’s Böögg, or straw man, is burned by the city’s carousers to mark the end of Fasnacht in Solothurn.

Fasnacht Bern (or Bärner/Berner Fasnacht) is the third largest carnival in Switzerland. The merriment starts on Thursday 2 March in 2017 when the ‘bear’ imprisoned in the Prison Tower in Bern’s Old Town is woken from its long winter sleep by loud drumming or Ychüblete. The bear is released and masked revellers swarm through the streets, restaurants and cafés in Old Town to keep ‘safe’. Guggenmusik cliques play throughout the three days of Berner Fasnacht alongside events such as the circus on Thursday, Kinder Carnival on Friday and various concerts and theatre shows on Saturday, among others.

Dubbed ZüriCarneval, Fasnacht Zurich is full of bizarre costumes, glitter and street shows. On Friday (3 March in 2017), the Ship of Fools comes to the city and goes on the ‘weirdest boat tour’ of the year. Throughout the weekend, Guggenmusik bands play in Münsterhof and Hirschenplatz, where kids come and have their own taste of Fasnacht Zurich. The festival culminates with a huge Valentine’s parade that keeps growing in size every year.

Payerne carnival is said to be the most popular Swiss carnival destination in the French-speaking part of Switzerland, celebrating its 122th year from 3–6 March in 2017. In the French region Swiss carnival is known as brandons but madness, parades and music are still prevalent. Straw torches are burned to signify the end of winter and beginning of spring, with three processions happening over the weekend of 4–5 March, including a children’s parade on Saturday and a float tour on Sunday around 3pm, and a Saturday night procession around 10pm.

People in costumes celebrate numerous events around the city – usually to the tune of marching bands playing signature out-of-tune cacophonies – including the Nuit des chineuses when local women don evening wear and masks and are not allowed to take them off until the end of the night. 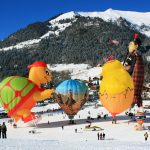