This Russian guide gives key facts to expats about the population and government in Russia.

Russian Orthodox 15-20%, Muslim 10-15%, other Christian 2% (2006 est.) note: estimates are of practicing worshipers; Russia has large populations of non-practicing believers and non-believers, a legacy of over seven decades of Soviet rule

Legislative branch: bicameral Federal Assembly or Federalnoye Sobraniye consists of an upper house, the Federation Council or Sovet Federatsii (168 seats; as of July 2000, members appointed by the top executive and legislative officials in each of the 84 federal administrative units – oblasts, krays, republics, autonomous okrugs and oblasts, and the federal cities of Moscow and Saint Petersburg; serve four-year terms) and a lower house, the State Duma or Gosudarstvennaya Duma (450 seats; as of 2007, all members elected by proportional representation from party lists winning at least 7% of the vote; members elected by popular vote to serve four-year terms)

Judicial branch: Constitutional Court; Supreme Court; Supreme Arbitration Court; judges for all courts are appointed for life by the Federation Council on the recommendation of the president

Social security in Russia: The system, rates and benefits explained 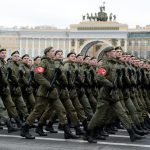