Home Moving to Russia About Russia An introduction to Russia: history, geography, and culture
Last update on June 11, 2021
Share

This factbook on Russia takes a brief look at Russian history and geography.

Founded in the 12th century, the Principality of Muscovy was able to emerge from over 200 years of Mongol domination (13th-15th centuries) and to gradually conquer and absorb surrounding principalities. In the early 17th century, a new Romanov Dynasty continued this policy of expansion across Siberia to the Pacific. Under Peter I (ruled 1682-1725), hegemony was extended to the Baltic Sea and the country was renamed the Russian Empire.

During the 19th century, more territorial acquisitions were made in Europe and Asia. Defeat in the Russo-Japanese War of 1904-05 contributed to the Revolution of 1905, which resulted in the formation of a parliament and other reforms. Repeated devastating defeats of the Russian army in World War I led to widespread rioting in the major cities of Russia and to the overthrow in 1917 of the imperial household. The Communists under Vladimir Lenin seized power soon after and formed the USSR. The brutal rule of Josif Stalin (1928-53) strengthened Communist rule and Russian dominance of the Soviet Union at a cost of tens of millions of lives.

The Soviet economy and society stagnated in the following decades until General Secretary Mikhail Gorbachev (1985-91) introduced glasnost (openness) and perestroika (restructuring) in an attempt to modernize Communism, but his initiatives inadvertently released forces that by December 1991 splintered the USSR into Russia and 14 other independent republics.

Since then, Russia has shifted its post-Soviet democratic ambitions in favour of a centralized semi-authoritarian state whose legitimacy is buttressed, in part, by carefully managed national elections, former President Putin’s genuine popularity, and the prudent management of Russia’s windfall energy wealth. Russia has severely disabled a Chechen rebel movement, although violence still occurs throughout the North Caucasus.

Three equal horizontal bands of white (top), blue, and red. The colours may have been based on those of the Dutch flag. Despite many popular interpretations, there is no official meaning assigned to the colours of the Russian flag.

Russia is located in Northern Asia; however the area west of the Urals is considered part of Europe. The country is bordering the Arctic Ocean, and lies in between Europe and the North Pacific Ocean. Russia is the largest country in the world in terms of area, but it is unfavourably located in relation to major sea lanes of the world. Also, much of the country lacks proper soils and climates, as it often is either too cold or too dry for agriculture.

Climate: ranges from steppes in the south through humid continental in much of European Russia; sub-arctic in Siberia to tundra climate in the polar north; winters vary from cool along Black Sea coast to frigid in Siberia; summers vary from warm in the steppes to cool along Arctic coast

Natural hazards: permafrost over much of Siberia is a major impediment to development; volcanic activity in the Kuril Islands; volcanoes and earthquakes on the Kamchatka Peninsula; spring floods and summer/autumn forest fires throughout Siberia and parts of European Russia. 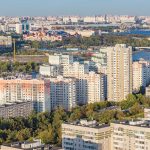 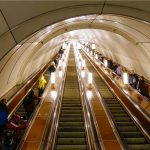