Portugal’s top brands – a Who’s Who of consumer hatred

OnStrategy has prepared its ranking of the 15 most valuable brands in Portugal, reading like a Who’s Who of consumer bêtes noires.

The energy sector leads the list with self-serving EDP winning the accolade of most valuable brand in Portugal.

The consultant, specialising in certified in the valuation of intangible assets, assigns a financial value of €2.3 billion to EDP, a compamny led by the astonishginly arrogant António Mexia.

“The Portuguese energy company leads the ranking, standing at a robust level of brand strength. This success is the result of its positioning, reputation and presence in the market, which in turn translates into a valuation of the brand,” OnStrategy drooled in today’s report.

In second place is another company that consumers don’t rank at all, Galp Energia, with a brand valued at €1,332 million, according to the study.

Third is the Jerónimo Martins brand, owner of fourth place Pingo Doce, with values of respectively €923 million and €847 million.

The banking sector comes in at sixth with the Millennium BCP brand, which is ‘worth’ €683 million.

In seventh place is the reviled telecoms behemoth, MEO, with a brand value of €564 million, followed by the equally detested NOS, with an assessment of €465 million.

The brands BPI and Continente occupy the ninth and tenth position.

The last five places in the ranking are occupied by Caixa Geral de Depósitos, Sonae, Mota-Engil, The Navigator Company and Delta. 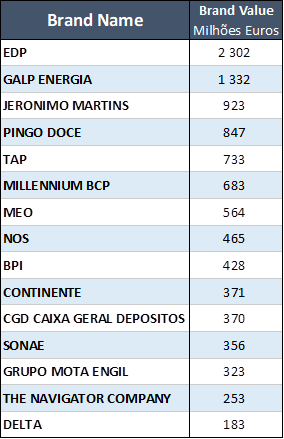 Portimão sets up shelter for vulnerable and homeless people

Five arrested over death of Cape Verdean student in Portugal