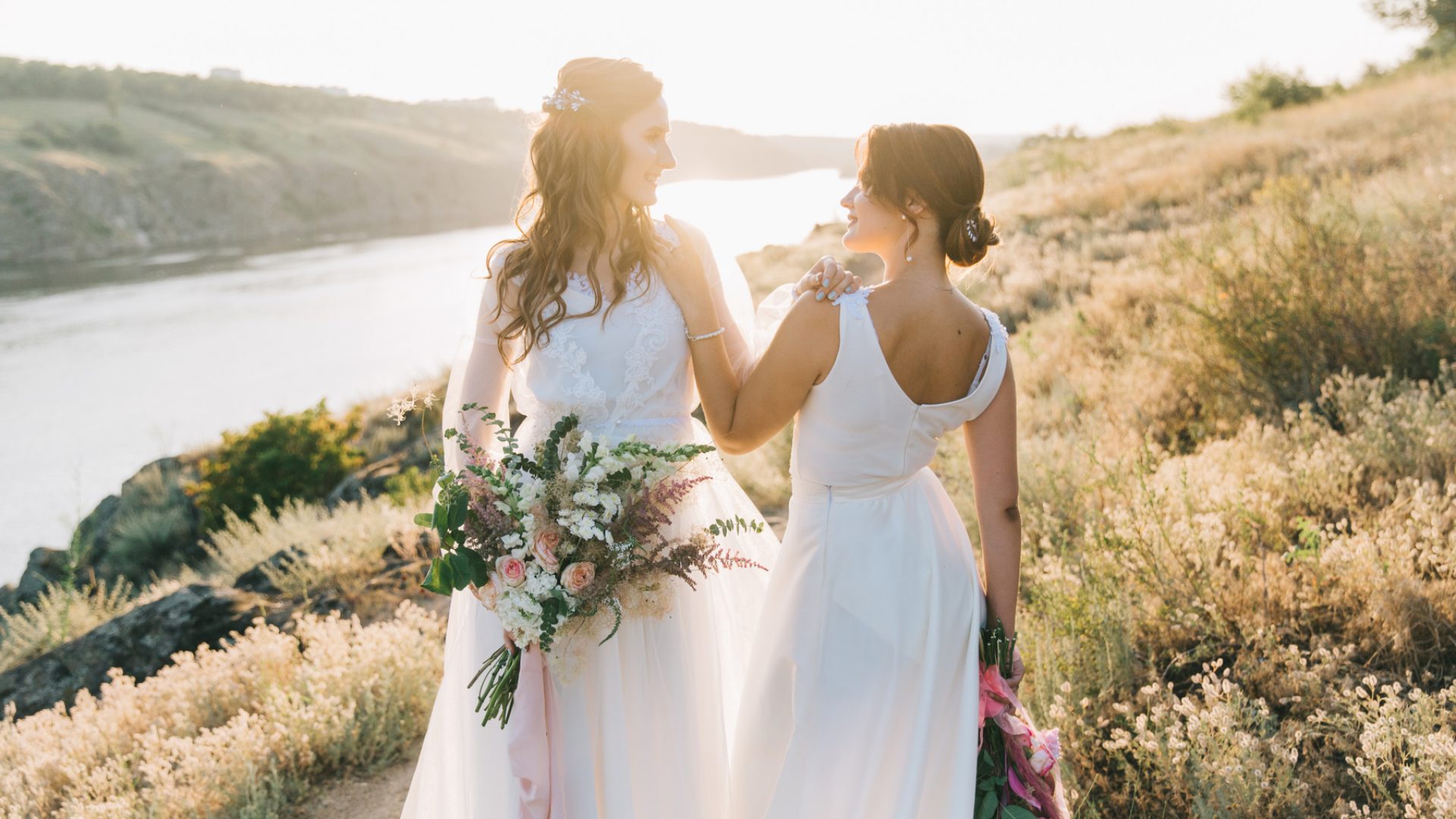 From rights and laws to registering a partnership and tying the knot, we explain all you need to know about gay marriage in Switzerland.

While still not as progressive as other countries in Europe, Switzerland has come a long way when it comes to LGBT+ rights. And, as of December 2020, this includes the legalization of gay marriage in Switzerland. This followed the parliamentary amendment to the Swiss Civil Code to define marriage from “a union between a bride and a groom” to a “union between two people”.

This marked an important victory for same-sex couples in the country; especially as it came several years after most other western European states had already passed the law. That said, it also saw a fair amount of criticism. In fact, in April 2021, opponents of gay marriage even gathered enough signatures to force a binding referendum on the matter. This referendum, held on 26 September 2021, saw the Swiss vote overwhelmingly to confirm the rights of gay couples to marry.

To help you navigate the rights around gay marriage in Switzerland, this guide covers the following:

Need to translate your marriage documents? You need the professionals at lingoking. On their easy-to-use online platform, you'll get access to their international network of 5,000 translation experts from around the world. Whether you need a one-off translation for your marriage documents or a dedicated interpretor for your new life abroad, you'll find the right professional for your needs on lingoking.

The history of gay marriage in Switzerland is relatively new. The country is one of the safest in the world for the LGBT+ community. It guarantees some key rights to its LGBT+ citizens. This covers everything from ensuring equal treatment before the law to deeming discrimination on the basis of sexual orientation and identity illegal.

That said, it has also had some serious catching up to do in terms of same-sex relationships. The Swiss government recognized same-sex unions in 2007 and legalized same-sex marriage in December 2020. By comparison, the Netherlands first recognized gay unions in 2001; followed by France in 2013, England and Wales in 2014, and Germany in 2017.

The passing of the new bill – which now includes wording that allows gay and lesbian couples to tie the knot – has been the result of multiple rounds of debate since 2013. It finally succeeded after a vote of 136 to 48 with nine abstentions in the National Council (lower house); plus 24 to 11 with seven abstentions in the Council of States (upper house).

But the recognition of gay marriage in Switzerland is also a result of shifting attitudes among Swiss people. In a November 2020 poll conducted by the LGBT umbrella organization Pink Cross, for instance, 82% of respondents expressed approval of same-sex marriage in strong or mild terms; an increase from 69% in 2016.

Besides legalizing gay marriage in Switzerland, the amendment also grants lesbian couples access to sperm donation. This also extends the role of parent to the woman not carrying the child. Furthermore, it allows same-sex couples that are currently in a registered partnership to convert their union into a marriage; thus opening up a whole new set of rights for both parties.

The laws on gay marriage in Switzerland

Requirement and rights in Switzerland

For a gay couple to tie the knot in Switzerland, both parties must be over 18 years old and have the capacity to consent. In addition, one or both individuals must be a Swiss national or reside in Switzerland.

Unlike same-sex civil partnerships, marriage provides the rights to obtain citizenship and the joint adoption of children. The ‘official’ union also facilitates a series of social and legal rights that two partners living together outside of marriage or in a registered partnership do not have access to.

Read more about planning your will and estate

With the new bill, lesbians can also access sperm donation. This represents a major change from the previous legislation in Switzerland. That specified that sperm donation was only allowed for married heterosexual couples; not for unmarried couples, singles, or homosexual couples.

Opposition to the gay marriage bill

Indeed, under Switzerland’s direct democracy system, new laws can be challenged and put to a referendum if more than 50,000 valid signatures are collected within 100 days. Opponents of the gay marriage bill gathered more than 60,000 valid signatures; decrying gay unions as “fake marriages,” and insisting that only a man and a woman could wed.

The Swiss People’s Party (SVP), the Democratic Christian Party (CVP), and the Federal Democratic Union (EDU) were all backing the same-sex referendum. They had been campaigning with the slogan, “Yes to marriage and family, no to marriage for everyone.”

However, Operation Libero, a liberal political movement that launched in the aftermath of the Swiss immigration referendum in October 2014, campaigned to keep the law in place. In April 2021, it gathered 100,000 signatures for a petition that stated, “it is important that people in Switzerland can get married irrespective of their sexual orientation or gender identity.”

The September 2021 referendum on “marriage for all” confirmed the changing attitudes towards same-sex marriage. Just over 64% of voters were in favor of giving gay marriages equal status to heterosexual ones. None of Switzerland’s 26 cantons voted against confirming the law. As a result, authorities expect that all its provisions should come into force by 1 July 2022.

Attitudes towards gay marriage in Switzerland

Attitudes and opinions towards gay marriage in Switzerland really vary, ranging from the progressive to the still extremely conservative; hence the controversy over the same-sex marriage bill.

Like in most Western countries, attitudes towards gay marriage in Switzerland differ depending on several factors. This includes people’s political inclinations, religious beliefs, and upbringing. However, overall, the Swiss have been increasingly supporting LGBT+ rights, particularly in recent years. Shortly after voters backed an anti-gay discrimination law in February 2020, a survey by Pink Cross showed that four out of five people were in favor of extending the right to marry to same-sex couples.

In November 2020, the organization released another survey, indicating that 82% of the country’s residents supported marriage for same-sex couples. Such support is especially strong in cities like Zurich, Geneva, and Basel, the centers of gay life in Switzerland.

Despite this, gay individuals and couples continue to endure hostility from the most conservative factions of the country. This is namely members of the Swiss People’s Party (SVP), the Democratic Christian Party (CVP), and the Federal Democratic Union (EDU). They all look down on gay rights and campaigned against gay marriage.

Sadly, this hostility has sometimes turned physical. After the anti-gay discrimination law passed, for instance, members of the gay community told Switzerland’s 20 Minuten paper that they were often physically attacked, and some even hospitalized. Other groups of young men told the same paper that they felt it was okay to hit openly gay couples, even suggesting that they could be “cured with a few blows”.

Sexual orientation is no longer a burning issue in Switzerland, except for among some conservative religious groups which may demonstrate their opposition. That said, they do so in a peaceful manner. Still, gay couples can’t marry in a church, and with the country being predominantly Catholic, some opposition to gay marriage continues to exist due to religious beliefs. Moreover, members of the Democratic Christian Party (CVP) have often shown overt hostility towards gay people. Some politicians have even gone as far as tweeting statements like “man plus man doesn’t go”.

The process that same-sex couples need to follow in order to tie the knot in Switzerland is not unlike that of heterosexual couples. Here is an outline of that process.

Applying for a marriage license in Switzerland

Gay couples planning to get married in Switzerland have to submit an application for preparation of marriage at the Registry Office where they intend to tie the knot. They must do this at least three months in advance of their wedding date.

Besides the application form, the future newlyweds must also sign a special declaration concerning the conditions for the marriage. This declares that they meet the requirements for marriage; i.e. they are both over 18, not previously married, and not related to each other. They must also declare that the documents presented are up to date, complete, and true. The fee for the application is between CHF 300 and CHF 400 throughout Switzerland.

The Civil Registrar then performs the marriage publicly in the town hall in the presence of two adult witnesses. You can find more information about the legal requirements and paperwork in our guide to weddings in Switzerland.

Registering a same-sex partnership in Switzerland is fairly straightforward. That said, partnerships don’t provide the same rights as marriage. This includes the right to obtain citizenship and the joint adoption of children.

Should they want to host their ceremony in a place other than their Civil Registry Office district, the couple can request so once their application has been processed. They must then follow this through within three months, with their identity documents and authorization in hand.

Witnesses don’t have to be present for same-sex partnership proceedings. At the end of the ceremony, the registrar will issue a deed of partnership, which the couple has to sign and can take home. In some registry offices, it is also possible to exchange vows and rings after the official ceremony. The cost of registering a partnership in Switzerland is between CHF 400 and CHF 500.

Notably, not all countries recognize gay marriages from other countries. Below is a list of countries that do and do not consider civil unions and registered partnerships made in Switzerland valid in their own country.

Countries that do recognize gay marriage performed in Switzerland

Currently, 31 of the 50 countries and the 8 dependent territories in Europe recognize some type of same-sex union. Most of them are members of the European Union. As it is part of the EU, Switzerland marriages are therefore valid in these countries, too.

If you plan to take up residence in Switzerland after marrying or registering a partnership, bear in mind that your foreign spouse or partner will need a residence permit and may require an entry visa.

It is important to note that should you travel to these countries with your spouse, then your legal civil status as a married couple won’t hold any official value in the eyes of the law.