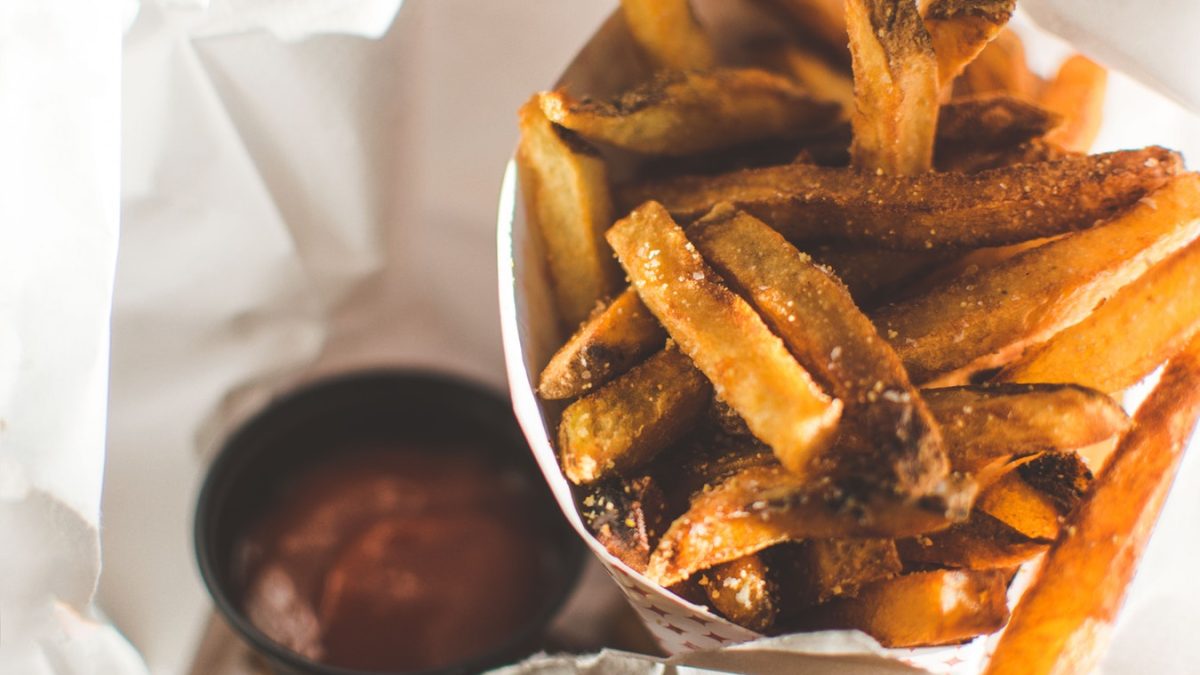 Belgian fries 101, with the Belgian friterie as our guide.

I acknowledge not everyone has their own personal deep fryer (but think about the possibilities if you did!), so making Belgian fries at home is probably not an option.  This is where the friterie/fritkot comes in.

These fry shacks can be roaming trailers, making the circuits between cities or rooted huts on public squares.  They always specialize in frites, but also offer meat in tube form and other questionable products, like this unidentifiable thing that’s not unlike the Belgian version of a McRib.  However, being displayed in a glass case at the counter under fluorescent lights makes it seriously unappetizing.

While there’s something satisfying about making your fries at home, friteries tap a more crucial, gut-wrenching need – that late night, on-the-go salty fried carb craving.  Open usually until 2 am every night, friteries make serious buck from the inevitable nearby bar.

When ordering your fries, you have two choices: small or large and which sauce do you want?  The fries are then shuffled into a large, thinly waxed paper cone before being dolloped with a dose of your favorite sauce.

A word about Belgians and sauces – they love them.  Most anglophones understand that to have a good barbeque, there’s a certain protocol that needs to be held.  Ketchup, mustard, relish, barbeque sauce and occasionally malt vinegar need to be provided to sauce up the meal.

In Belgium however, any respectable barbeque has a minimum of ten sauces provided.  I’m not sure how everyone calorically or financially affords the bevy of toppings.  Even the barbeques thrown by my ‘fresh out of college, scraping by on our first paychecks’ friends have a veritable buffet of condiments.  It allows me to fantasize that within every Belgian kitchen there’s a sauce bar.  In my mind, the sauce bar is not unlike the liquor cabinet of Donald Draper, but the near empty bottles of whiskey are replaced by jars of mayonnaise.

As you wait in line to order your fries, you’ll often hear friends fighting over which sauce is the best, each person being a stalwart supporter of their favorite.  Instead of fighting over the Yankees vs. the Red Sox, Belgians take that energy to duke it out between the samourai and brésil fans. Because the thing is, even though there are a lot of sauce options, people don’t change it up that much.  Once you discover your sauce, you’re matched for life.  I view it sort of like the Belgian version of the Harry Potter sorting hat.  The type you choose identifies you as a person, so it’s not a lifetime commitment that people take lightly.

Because the sauce-fries relationship is important, it’s wise business for a friterie to have a wide array of options.  If you don’t have someone’s condiment, they might still order fries, but they won’t be terribly enthused about it.  Once you’ve hit upon your combo (Samourai sauce is my soul mate), you develop an immoveable idea of what a packet of fries should be and it’s that image you crave.  So while you might eat fries with another person’s topping, you won’t feel content.  The feeling of a satisfied craving never comes and you’re left feeling peeved and put out.  The sauce connection is a lifetime connection.

It might also seem odd, maybe even a bit repugnant to the uninitiated, that mayonnaise-based sauces are good on fries or even inspire cult-like followings.  But when in doubt, always trust the Belgians.  Mayonnaise-based sauces are structurally better for Belgian fries than ketchup because the creamy texture compliments the downy interior of the fried potato. The tang of the whisked-in lemon also matches the crispness of the frite exterior – it’s zing for zing.

After being exposed to this mayonnaise concept for so long, I’ve realised it feels better too. The acidic tang of ketchup feels abrasive and wrong when coupled with the velvtey/crunchy combo of fries.

The final pièce de resistance for Belgian frites is the seemingly illogical pile of mayo on top of the fry cone.  The general concern for someone experiencing their first cone of fries is that you will end up with an ice cream cone situation, where you’re left with nothing at the end but the dry bottom nubbin.

There is always enough sauce though.  The mayo has this mysterious way of shimming itself up and down the sides of the fry cone as you eat, so you’re always able to find a sheen of sauce to swipe a fry through, right to the very end.

So where are the best places to purchase frites while in Brussels?  This is a constantly debated topic and every friterie has its pros and cons.  Sometimes the label ‘the best’ is completely dependent on its proximity to you and your craving for fries.  However, here are a few places I recommend.

This friterie is located near the Grand Place and unlike other nearby friteries (Mannekn Frites, Fritland), the fries are consistently good.  Also, I’m not sure they ever close because I always see a line out the door most  weekend nights till the wee hours of the morning.  They offer a lot of different sauce options, they’re quick, the prices are normal, and the gents who work the counter are fun and cheeky.  I also like that they play ridiculous Russian techno despite their North African origins.  Plus, you can grab your frites and eat them on the Grand Place.  You cannot have a more scenic eating place than this.

This is my personal favorite.  The guy who runs it can sometimes be a jerk à la the Soup Nazi (so make sure you know what you’re ordering when you get to the window), but he takes his fries very seriously – he goes through the cone as much as he can to pick out dried out and bad fries before saucing it up.  Plus, for being such a small fry shack, there are a lot of sauces!  I like that he’s intent on sticking to what he does best and keeping the operation small.  The benefit is a good packet of frites, but the drawback is that sometimes you have to wait up to an hour to get them.

Located off the actual Barrière roundabout, I like this one because it’s an actual trailer on wheels – it feels authentic.  Plus, the frites are pretty good and it’s always quick as there are not many tourists that know about this one.

Ok, yes, everyone knows about this one.  I personally have misgivings about this friterie – it’s near the European Institutions so a lot of Eurocrats frequent it, making its prices higher than any other friterie in town.  Plus, they don’t even put the sauce on your fries for you.  I know it’s not really a big deal, but there’s something about this small difference that suddenly moves it from being street food to fast food.  The ambiance is definitely killed and that somehow changes the flavor ever so slightly.  That being said, this is the only place I know where you can get Sauce Spécial – a mayo-ketchup combo with chopped raw white onions.  Raw onion is a rare thing to find on dishes here in Europe, so it’s a nice variation sometimes, especially when I’m missing a Chicago Dog or anything resembling summertime American barbeque/baseball.